As you all know, there are evictions every day for the rest of the week! You get a vote every day, so remember to keep voting for your favourite scientist.

But how do the scientists feel, being bombarded with questions and then facing eviction? One of the scientists who took part in I’m a Scientist in March, the lovely Louise Buckley, has agreed to tell us about what the scientists taking part are REALLY thinking… 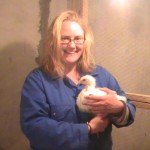 Hey there! I am Louise one of the scientists from the last “I’m a Scientist….” event. This competition is looking even more exciting than when I took part – I cannot believe how many questions are getting asked. It’s a total mash-up of questions – these scientists are going to need to take a holiday afterwards to recover!

I bet the scientists are starting to feel nervous now about who’s going to get evicted. We get labelled ‘the scientists’, but we are only human too. I know I was worried that you guys wouldn’t like me, that I’d get evicted because my science was crap or you thought I was a weirdo. Nobody likes to be evicted first. It’s kinda embarrassing. A bit like being a member of McKinley High’s Glee team 🙁

LMAO – my major fear was that you would ask me loads of questions that I didn’t know the answer too. I was terrified. And you did – and I coped and I learnt loads along the way. I can see from the questions asked at the moment that the scientists at the moment are getting asked loads of challenging questions. Keep ‘em coming. It reminds us that there is soooooo much more to science than our narrow fields of research. We sometimes forget that.

The scientists will be learning at the moment that it is okay to be wrong or not know the answers to every question. Sometimes you guys will know more than us, other times we will know more. You guys taught me that rainbows are circular – and I was like, nah, rubbish, wind-up, but it was true. Today’s scientists are learning all sorts of new things and they are learning them because of you.

But the most important thing that the scientists are learning at the moment is how to communicate our science to young people. Many of us don’t get that opportunity often. I know I was excited but scared that I wouldn’t be able to describe my work in a way that wasn’t total gobbledegook. These scientists are trying to manage it too.

We need to learn how to make our stuff sound interesting. So if you don’t think they have made something clear,  ask and ask and ask again. Don’t “Yeah, checked out of this conversation a minute ago…” (sorry Sue Sylvester!) Give ‘em feedback, show interest, and you can make today’s scientists better. Remember they are all terrified of being evicted so DON’T be too tough on them personally – but DO give them a hard time scientifically. And that’s how Sue Louise sees it!

Posted on June 23, 2010 by in Evaluation, Event News. Comments Off on A scientist gives us the lowdown on what it’s like behind the scenes…