I’m a Scientist and RCUK

Why RCUK funds us

RCUK has provided funding for I’m a Scientist in order to provide RCUK researchers with a platform to engage young people in their research and develop transferrable skills such as communication. A key aim for RCUK is to encourage engagement between young people and researchers to inspire, enthuse and motivate the next generation of researchers and enable more young people to act as informed citizens. I’m a Scientist gives young people a flavour of life as a researcher and engages them with some of the cutting-edge research funded by RCUK in areas such as healthy ageing, energy, digital economy, space and food science.”

Inspiring the next generation 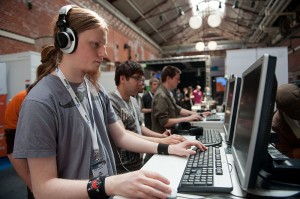 Gaming questions were popular in the Digital Zone, while DNA damage was a hot topic in the Healthy Ageing Zone, image by Fæ for Wikimedia

A zone a year since 2011 means that RCUK funding has so far brought 15 scientists together with well over 600 students. The scientists, including a statistical geneticist, professor of organic chemistry, digital research engineer and senior lecturer in computer science, to name but a few, have given in excess of 1,400 answers to over 1,000 student questions.

Specific topics covered include the effects of video games on social skills, the generation of energy using nuclear fusion, and the science of ageing diseases such as Alzheimer’s. Personal questions to the scientists and a whole range of broader science questions on everything from animals to space have allowed students to discover just what it means to be a scientist.

We hope to continue working with RCUK to inspire the next generation of scientists and to inform future citizens. If bringing students and scientists together is something that could benefit your organisation, please get in contact with us: email shane@gallomanor.com or phone 01225 326892.

Posted on May 8, 2013 by in Case Study. Comments Off on I’m a Scientist and RCUK