We’ve had plenty of primary schools take part in I’m a Scientist zones in the past, nestled in among secondary schools. Feedback from primary teachers and students shows they get a lot out of taking part. Primary schools are looking for science enrichment activities too, and talking with real scientists is exciting at primary school as well as secondary. Scientists often wouldn’t know the students were Year 5 & 6, not Year 7 & 8, if we didn’t tell them.

This March we decided to run 2 primary school only zones, for Year 5 & 6 students. In part to avoid possible situations of primary students reading questions on non-primary-friendly topics asked by secondary students in their zone (think sex, drugs, rock’n’roll). Partly to open up I’m a Scientist to a wider group of UK schools and students. And importantly because one of the conclusions from the ASPIRES project about young people’s science and career aspirations, is that STEM education projects need to begin earlier, at primary school.

The 2 primary zones – Caesium Zone & Xenon Zone – were general zones, each with 5 scientists from a range of research areas, but avoiding any non-primary-appropriate topics (no IVF experts for instance). 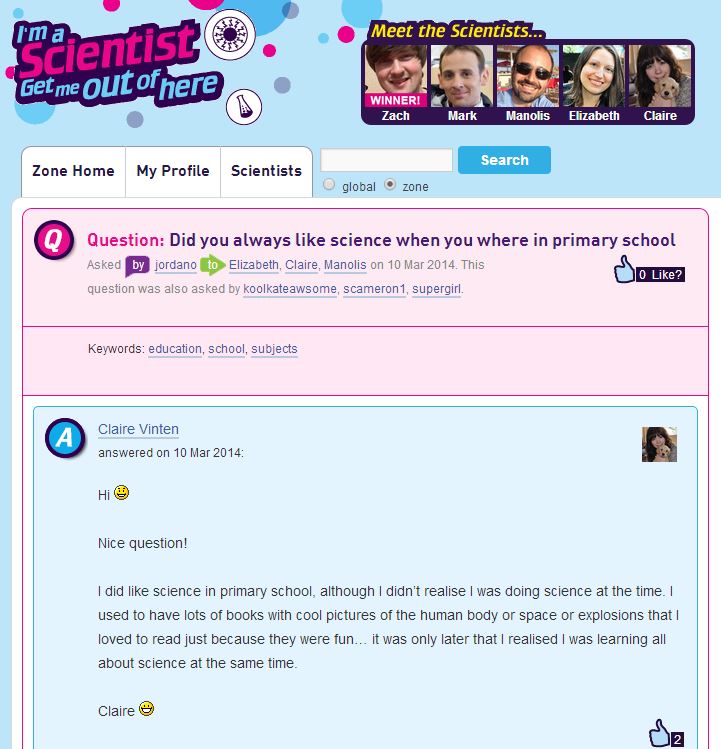 “Did you always like science when you were in primary school”

Posted on April 10, 2014 by Moderator - Josh in Evaluation, News. Comments Off on I’m a Scientist zones for primary students