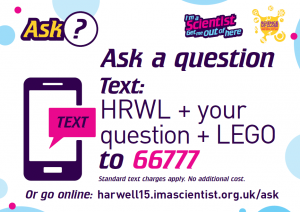 On Saturday July 11th the Harwell Research Campus opened its doors to the public. 10,000 people were expected to come and see some of the most complicated and cutting edge science equipment in the world. Hundreds of volunteers working with that equipment were on hand to speak with the public and show them what happens.

We created a Harwell Zone to allow visitors to text in questions. It was promoted using posters as above.

The logic was that with 10,000 visitors some would not get to ask their questions, or may think of it later, or possibly be too shy to ask in person. It was a family day.

Working with the over-worked (understatement klaxon just sounded) outreach team at Diamond and Harwell we set the zone up and promoted it to exhibitors.

It wasn’t a great success. A mere 14 questions were sent.

However in the interest of continual improvement let’s look at what worked, what didn’t and most importantly what would be do differently if given the chance.

The technology did. Visitors were able to text a question, get a response to manage their expectations and a notification when someone answered the question. We also had an enthusiastic response from exhibitors who signed up. However the enthusiasm was far far greater amongst I’m a Scientist alumni. It seems that we didn’t really reach many new scientists. It was in the main scientists we already knew who happened to be already exhibiting.

We didn’t reach new scientists. The vast majority of scientists there were not aware that they could have taken part. This meant that the online offering was very patchy. As you wandered around the trained eye (mine) occasionally picked out a poster. The only exception was the RAL Cyrogenics Lab where Vicky Bayliss had printed out extra posters and placed them all around the lab.

We didn’t reach the public. There simply was not enough publicity.

What would we do next time?

Posted on August 24, 2015 by ModShane in Evaluation, News. Comments Off on Harwell Open Day Zone Report