What Jonny Hunter and Laura Finney did with their prize money…

Jonny was voted the winner of Antibiotics Zone in June 2016. Here he reports back on how he used his £500 prize money to support his outreach activities with fellow winner Laura from Catalysis Zone.

If you’d like the chance to win funding to develop your science outreach work, apply for I’m a Scientist at imascientist.org.uk/scientist-apply

I won my I’m a Scientist zone at the same time as another scientist from my centre (Laura Finney) and we decided to pool our money. After a number of discussions, we decided to stay close to home with our main activity. So, we ran a stall at “Science in the Park 2017” based at Wollaton Hall in Nottingham.

This was a free public event that brought together scientists from many different fields so they could engage with the general public and tell them why our research is so fantastic. As our common research topic covers photochemistry we decided to tell people about light. To this end, we devised a series of experiments that showed how light can be used to carry out chemistry. We even made a video about it and posted on The Conversation UK’s website (Laura used to work there)! Watch the video here: https://www.facebook.com/ConversationUK/videos/730334860468190/?hc_ref=ARRSrkcYdKNfRsga9rWbo85te2QGFSUSb4DPuErPPdkNMM0B5fRTiQGgg3Jn3t1A3rU)

We show you some cool chemistry tricks you can do with chemicals you probably have at home … all right in front of the Batman castle in Nottingham.

Since then, the equipment we bought with the I’m a Scientist money has been used at a number of different events such as Pint of Science 2017 and Wonder. 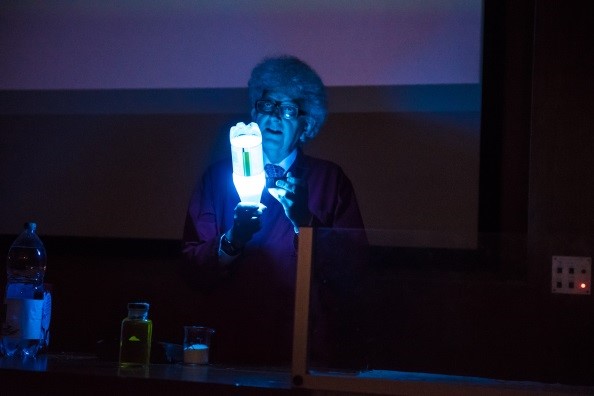 I have not been idle either. Since I’m a Scientist, I have competed in FameLab 2017 – reaching the regional finals by talking about the science behind poo. More recently, I won 3rd prize for my Art in Science competition submission. 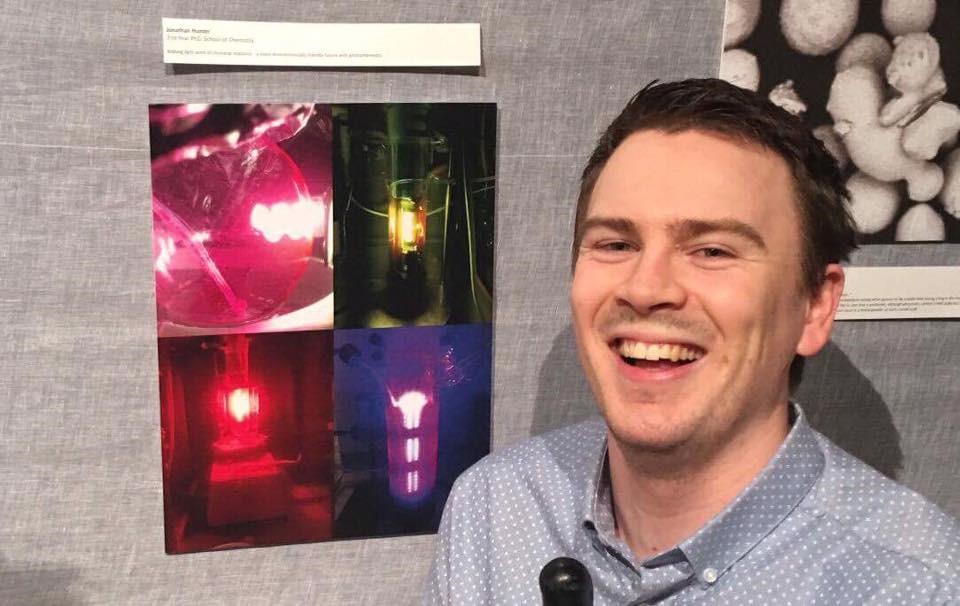 This. Photochemistry. Is an Art Attack.

I think that I’m a Scientist has benefited me greatly as gave me the unique opportunity to develop my communication skills online which have been very useful in my following endeavours. I am extremely grateful to the I’m a Scientist team for organising the event and to everyone who voted for me. I would recommend it to anyone in research – and have!

Posted on July 18, 2018 by modantony in RSCWinner, Winner Reports. Comments Off on What Jonny Hunter and Laura Finney did with their prize money…