What Imogen Napper did with her prize money…

Imogen was voted the winner of the Erbium Zone in March 2015. Here she writes about donating her £500 prize money to the Marine Conservation Society.

If you’d like to win funding for your own public engagement work, apply for the next I’m a Scientist, Get me out of here: imascientist.org.uk/scientists

The Marine Conservation Society  is extremely grateful to Sea Champion Imogen Napper for donating the £500 prize she won on I’m a Scientist Get me Out of Here. The donation was used to buy equipment, resources, and expenses.

The donation enabled us to equip volunteers and staff for more education outreach work.

Partly using the donation, we were able to train and equip 13 further volunteers (seven in Devon, three in Somerset at the University of the West of England, and three in Ross-on-Wye). Having more trained volunteers supplied with supporting resources including memory sticks, slide advancers, banners, and props (inflatable globes, compartmentalised boxes filled with specimens, cuddly turtles) enables us to reach out to and engage with more children to increase ocean literacy across South West England, especially in Plymouth.

Since 2015 Imogen has led sessions for over 1600 children in 14 schools, 3 informal groups and at 7 other set ups including Bioblitzes, seashore safaris and beach cleans. Great feedback for her work includes: 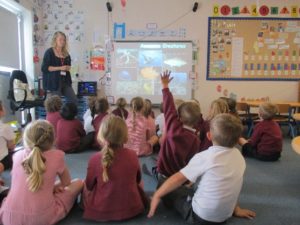 Imogen leading a session in a Plymouth school

Attending public events is one of the main ways that the Marine Conservation Society engages with people to spread our messages about why it is important to care for the sea, how the state of the sea affects everybody, and how everybody can do something to help. We’ve utilised the compartmentalised boxes as touch tables filled with specimens like shells, stones, and egg cases for children to handle and ask questions about.

Having our colourful banners and soft turtles at events helps us to engage with children and adults. People love to come up to our stall and ask about things we have on display or talk about their experiences of the sea and marine life. We use this opportunity to educate them about marine pollution, microplastics (Imogen’s area of research), things they can do to help the sea (like not releasing balloons, not using scrubs with plastic in), and also offer our free education sessions to more children and teachers/group leaders. 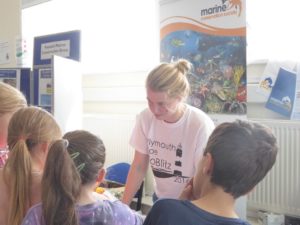 Imogen at an event using the banners and other resources

Since the end of 2015 when the money was made available and the end of 2017, we’ve been to more than 28 events where we’ve used some of the resources and spoken to c.6725 people

Part of the donation was used to fund Imogen’s travel and expenses to 2016 events including: 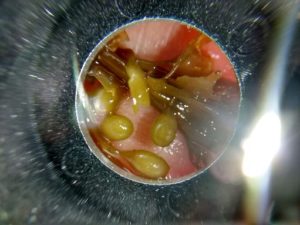 Since she started volunteering with us in 2014 Imogen alone has represented MCS at c.20 events/talks/fundraisers, communicating to around 2500 people about the importance of preserving the quality of our seas for current and future generations. She is a fantastic advocate for us and for our oceans. We’re very happy that she continues to support our education and outreach work, as well as being a fantastic scientist at the forefront of marine research. 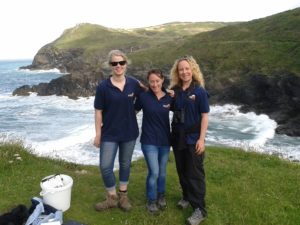 Imogen and other Sea Champions at Lundy Bay

Posted on July 16, 2021 by admin in Winner Reports. Comments Off on What Imogen Napper did with her prize money…