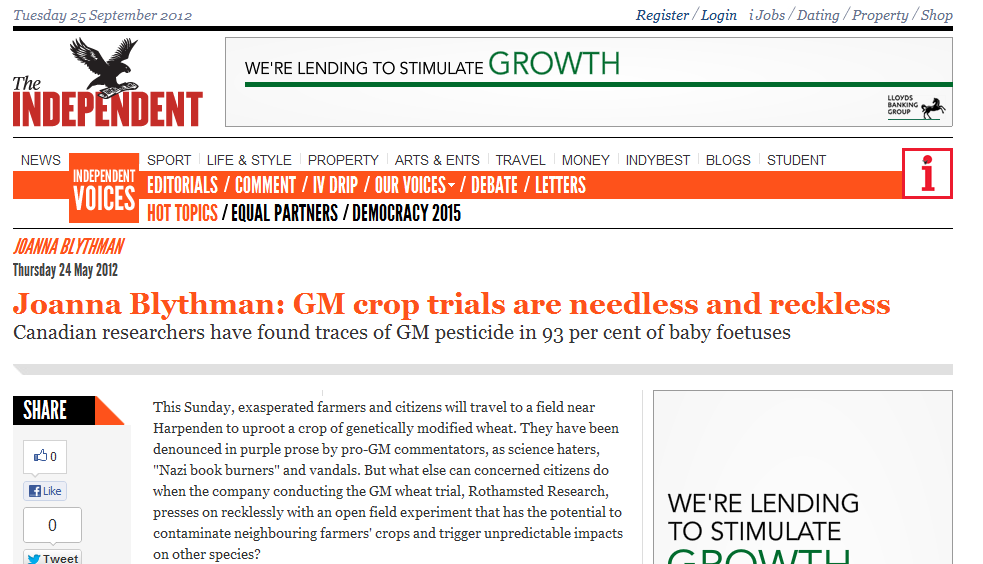 The Independent - article on GM

Joanna Blythman was the inspiration for this event. An article she wrote for The Independent on may 24th 2012 contained the line:
Alarmingly, Canadian researchers have found traces of GM pesticide in 93 per cent of baby foetuses.

At the time (pre-redesign) the article generated well over 100 comments which mostly seemed to involve people with one viewpoint SHOUTING at a group with a different viewpoint. it wasn’t pleasant and The Independent and the people sceptical of GM technologies weren’t the only ones inflaming the debate about GM.

People will starve to death because of anti-GM zealotry

The headline writer at the Daily Telegraph seemed determined to generate heat rather than noise.
We’ve wanted for some time to run an event aimed at the general public and I took the decision on May 30th to launch a GM Food Zone in order to create:
a neutral space and recruit experts from across the range of interested disciplines with a range of views to answer questions from interested members of the public…

Neutrality
We always knew that the subject was contentious and that rather than just be neutral we had to be seen to be neutral. We decided to recruit a Advisory Panel who could help us decide on the scope of the event and who should be the experts taking questions from the public. We also were fortunate to have Simon Burrall from Involve join the project team to provide advice at this stage.

Deciding on the panel and getting their agreement took just over a week. They consisted of an eminent pro-GM scientist, a Professor of Science and Democracy with a firmly neutral stance on GM and a Green Party policy committee member working on scienice, food and agricultute policy.

The panel’s role was to advise us on the range of experts we should have and to approve the experts from the list of nominations we received.

Part of our strategy on being seen to be neutral was to ask for nominations for experts. We published a call and promoted it via twitter, our email lists of scientists and through a range of external organisations such as the NFU and the Soil Association.

Within a week we had 70 nominations from a wide range of people and organisations. Sense about Science and the Soil Association made nominations as did a wide range of academics and members of the public. The nominations page was viewed 700 times, an indication that there was significant interest in what we were planning to do.

We worked with the Advisory Panel to agree the composition of the group of experts. We approached institutes, nominees, individuals and NGOs to get further nominations to ensure we had as much choice as possible for the Advisory Board to choose from.

On Friday June 8th we presented the panel we the nominations we had received. Over the following week through email, Basecamp and telephone calls we had agreement on our final five.

There is more about the selection process here. 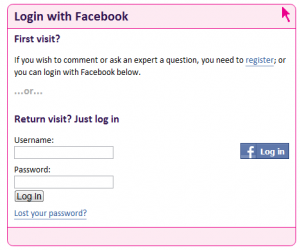 We gave the scientists a week to sort out their profiles and to prepare for questions from the public. The GM Food Zone differed from our previous zones in that anyone could register, ask a question and leave a comment. They could register via Facebook or via our own registration form. In addition 1,800 students and teachers who had just taken part in the main I’m a Scientist event were automatically registered in the Zone.

65 people registered on the site. They came from a wide range of places. 29 used webmail addresses such as Gmail and give no clue to where they are from. 10 were teachers. 8 were from universities.

42 questions were asked. 31 were published. The experts gave 99 answers.

The range of questions was good. Some were about the science, some about societal matters. Many were from an anti-GM perspective, many were neutral and many were Pro-GM. It was well balanced. There is more analysis here.

163 comments were left. 155 were published. 6 commenters were emailed to ask them to amend their comments to be less attacking of the person.72 comments were anti-GM, 21 were Pro-GM, the remainder didn’t express a clear view.

We’ve not done enough analysis on the way that the different sides wrote their comments but the impression I was left with was that those who are anti-GM are dogmatically opposed, whereas those expressed views in favour are more open to debate. It seemed to be the case that those we were supportive of GM were open to having their minds changed. The commenters opposing GM also seemed to rely heavily on one particular report and the commented more frequently than those who supported GM.

The site went live on June 7th 2012 with the event launching properly on June 18th when we announced the group of experts. The website has seen substantial but not amazing levels of traffic:

Much more detail about who read what can be read here.

Personally I found the discussions on the site fascinating. I wrote a summary in the second week of the event that tried to get to the nub of the disagreement. Re-reading the piece, it still rings true when taken with comments from two of the experts, Les and Andy. As Andy wrote in his comment:

I realise the comment is made in good faith, but in my view, Les’ first sentence is itself a big part of our problem.

Our experts disagree with each other, but respect that they write in good faith. That isn’t the case with most of the commenters. Mistrust still prevails and despite our best efforts to be balanced and seen to be balanced, some GM sceptics still assumed that we were a well paid mouthpiece for the GM Industry.

Dina, this is a pro-GM site, in case you didn’t notice. There is an unimaginable amount of money involved in them trying to make you like GM foods.

After the event I was very pleased to see that someone had written up their opinions of what we did. They weren’t complimentary and started from the viewpoint that it was:

an attempt by the Wellcome Trust to promote its GM message

Sadly if the default position in this debate is that any attempt to have a conversation is a move by the other side, then it is going to be difficult. Perhaps though the problem is that too few attempts at genuinely balanced, neutral conversation have taken place and it just takes a little getting used to. Approaching the authors of this piece gives me a little glimmer of hope. They’ve not retracted their inaccuracies but they have at least published my response to them.