Who and how many?

The GM Food Zone was open to anyone. 65 people registered in addition to the students and teachers who were automatically registered.

24 people asked questions. 4 of them asked 3 or more questions. There were 30 questions approved in total. Read them here. A further 11 were not approved as they either replicated comments that had already been made or were off-topic.

10 questioners were teachers or students at schools. 4 questioners had .ac.uk email addresses. The remainder used webmail leaving no clue as to who they were.

18 were about the science behind GM Food, 12 were about societal effects of GM Food.

9 suggested a Pro-GM stance, 9 were neutral and 12 seemed against GM.

17 were a request for facts, 13 were asking for opinion. The breakdown between fact and opinion was even through Pro, neutral and Anti questions.

A summary of the questions asked was published during the event. “let’s celebrate the inherently political nature of science”

All the questions were answered.

Not all experts answered all the questions. 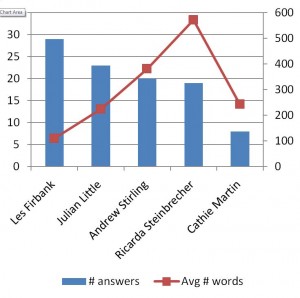 Taking into account the 28 comments left by the experts it seems that Andy and Ricarda wrote a total of 20,543 words compared to 12,755 by the other experts. It looks like some redressing of the imbalance.

Of the 135 comments left by visitors, just over half (70 comments) were left by just 3 people. “dingo” contributed 38. All three were strongly anti-GM.

We think we can improve things. Firstly we made a mistake with our introduction question.

What do you think is the main issue for ensuring we can feed the world in 2050?

It was too good. It brought out most of the issues in one go. It raised lots of issues (Andy Stirling listed 10 in his answer) and closed down lots of questions that might have been asked by the public. It also meant the conversation didn’t develop through the questions.

We should have opened with an opener. Our question was more of a closer.

We are very pleased with the proportion of questions that came from schools. It is higher than it felt at the time. A strange aspect to come out of the analysis of who asked questions and commented is that there is less crossover than expected. Out of the 30 people who left comments only 6 asked questions. It suggests that the majority of the commenters were there more to make a point than ask a question. It also shows that there is a demand for answers from people not normally associated with the debate.

The experts were very generous in the amount they wrote in their answers. There are some interesting points to pull out.

474 vs 172 – average number of words per answer. Andy and Ricarda (the 2 Anti GM experts) wrote answers nearly 3 times as long as the Pro-GM experts. The Pro-GM experts were accused in one thread of being complacent. Are those opposed to GM used to having to explain their position in detail? Are those in favour simply more succinct? Considering the prodigious output of those who are opposed to GM it is ironic that some still feel that it is a ProGM site.

I was delighted that the comments did not degenerate into a slanging match but I was disappointed that they were dominated by the same small group of people. The conversations would have benefited from contributions from a wider range of people.

The comments were in general polite. Only 6 comments were rejected during the event for contravening the house rules. Even then they were only slightly impolite. For example:

“I am also rather shocked at these replies by apparent experts.”

With the permission of the commenter we replaced the word “apparent” with “the”. Little things like this helped keep the conversation civil.