Last night five scientists researching different aspects of antimicrobials took to the floor at the FIS Conference at the ICC in Birmingham to take part in I’m a Scientist Live: Drugs, Bugs and Infections. 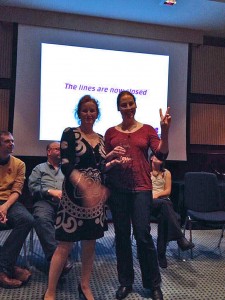 Our MC for the evening, Simon Watt, kicked off by spending 10 minutes interviewing Laura Piddock, Chair of Public Engagement at BSAC about the current situation in research. The scientists introduced themselves and gave their Science Facts and Fictions before the 100-strong audience launched with their questions.

30 mins later with time running out, Simon brought the event to a climax by asking the scientists to spend 30seconds telling the audience why they should get the votes and the winner’s trophy. The vote that followed confirmed that Anne Marie’s promotion of the IMI’s Summer School for Year 12 students was enough to edge her into the lead and win the vote. 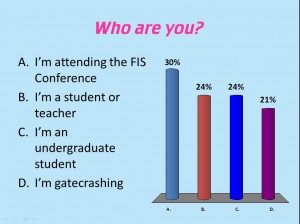 105 attendees on the evening (105 voting handsets were used).

Over half the audience were students evenly split between schools and undergraduates. This means a lot of the students who asked for tickets failed to show. We had a capacity of 150 for the evening with a maximum limit of 200 for the room. Whilst we expected some dropout we are surprised by the level of no-shows. We will need to over-book more heavily in future.

Voting was close. Only one vote separated Anne-Marie from the scientist who was second-placed. We discussed what to do in case of a tie beforehand, but were clear it wouldn’t end up as a draw. We need to take those plans more seriously in future.

Having the electronic voting cards allows us to ask some immediate evaluation questions. A healthy majority enjoyed the show and learnt from our panellists. A slightly smaller majority have caught the antimicrobial bug. 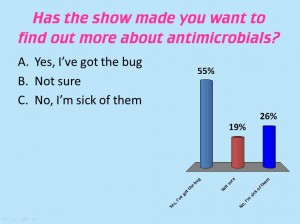 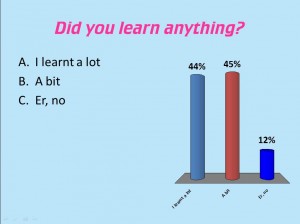 What else did we learn/have confirmed from last night? 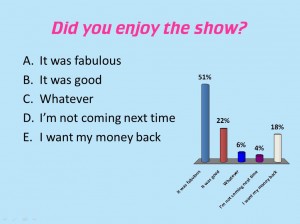 Posted on November 20, 2013 by ModShane in Evaluation, I'm a Scientist - Live. Comments Off on IAS Live: Drugs, Bugs and Infections