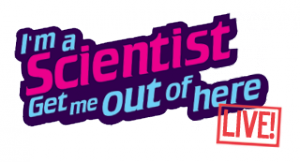 During November, we're running two I'm a Scientist: Live events. The first, titled Drugs, Bugs, and Antibiotics will be in Birmingham on the 11th November as part of the FIS Annual Conference, with the British Society for Antimicrobial Chemotherapy, and the Society for General Microbiology.

This foray into the world of microbial nasties will be hosted by Simon Watt, and a few weeks ago we put out a call for riveting researchers, scintillating scientists and absorbing antimicrobialists. The call was answered, and it's time to meet the scientists:

Amy has recently completed a PhD with research focusing on antimicrobial resistant bacteria in the UK dog population.

Dogs are often valued members of people’s families and their health and welfare is considered of the utmost importance. When they become ill, we want to make sure they get better and, in some cases, this means treatment with antimicrobials.

Ann-Marie is a Fellow at the University of Birmingham. Her research group looks at how bacteria attach themselves to host tissue, and how this process influences bacterial infections. They looking for a way to prevent bacteria from sticking to tissue, thereby preventing disease.

We hope that down the line, this approach will complement existing antimicrobial therapies and be useful in cases where bacteria have become resistant to antibiotics.

Mark is a Senior Research Fellow at the University of Birmingham. His research focuses on antimicrobial action and resistance.

I’m interested in working out how bacteria become resistant to antibiotics and identifying new ways to prevent infection from occurring.

Peter is Professor of Clinical and Public Health Bacteriology at the University of Birmingham and Consultant Microbiologist at Heart of England NHS Foundation Trust.

My research is in the molecular evolution and epidemiology of antibiotic resistance, Clostridium difficile, tuberculosis and molecular diagnostics for infectious diseases.

Richard is a Senior Partner at the biopharmaceutical product development company, TranScrip.

I am a medical doctor with interests in science and have developed more antibiotics than anyone else from within the pharmaceutical industry.

For more information on I'm a Scientist: Live, as well as the event being run in London on the 18th, see this post: about.imascientist.org.uk/2013/im-a-scientist-live-drugs-bugs-and-infections/

Tickets to this event are sold out. We will be organising more live events in the future, check back for details.