What Helen Johnson did with her prize money…

won the Space Zone in November 2014.  We asked her to update us on what she’s been able to do with her £500 prize money and here is what she said…

I had an absolute blast taking part in I’m a Scientist! It was such a thrill to connect with students from all over the country and be able to share my research. I was amazed by their curiosity, their insightful questions, and it was brilliant to see such enthusiasm for astronomy and space exploration.

Those two weeks were like a wonderful scicomm bootcamp – I learnt so much and it was one of the most rewarding outreach experiences I’ve ever had. I’ve since been using my IAS mug with pride and telling anyone who will listen that they have to give it a go themselves. Although up against some tough competition (Hugh, Julian, Jane and Heather) I was lucky enough to win in my zone, picking up the £500 prize money. 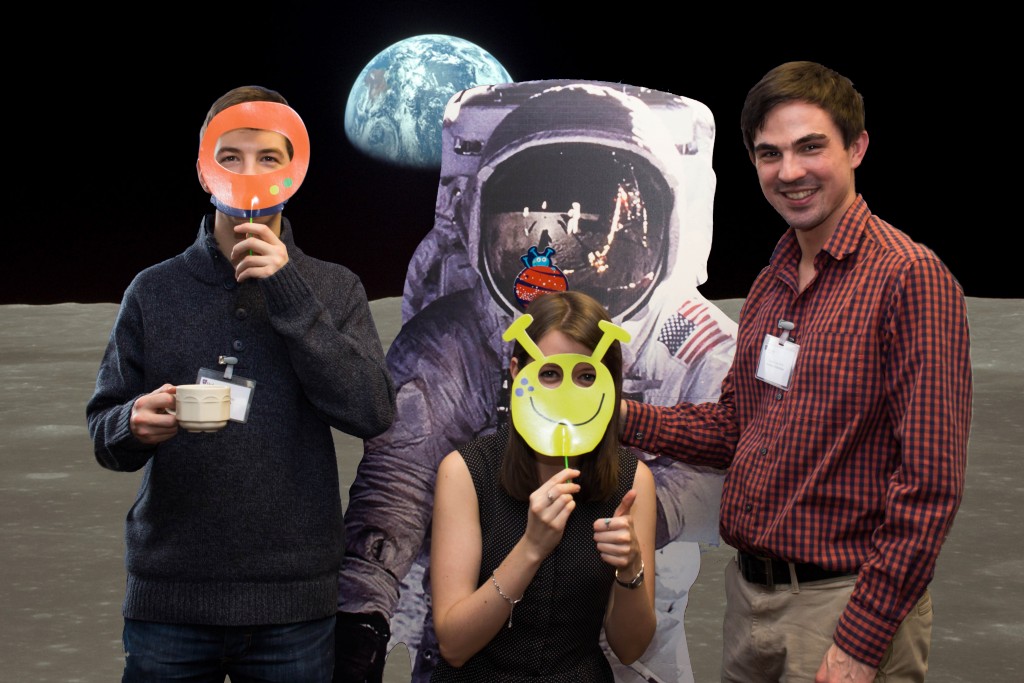 The super cool thumbs up suggests these may not be real aliens.

Within the Physics department at Durham we have a brilliant outreach team and there are always plenty of fantastic opportunities. At the time I had already been involved with a number of different projects (science festivals, planetarium shows, events to encourage girls into Physics) and so figuring out how best to spend my winnings was a tough decision. After much deliberation I decided to invite 50 local students to the department for a full-day of Space themed demos, talks and hands-on activities.

Little did I know what I was getting myself in for! I’d never organised such a huge event before. Thankfully I had my outreach partner-in-crime Steph Bartle and many enthusiastic PhD students/postdocs/staff on hand to help “Space Day 2016” become a reality. There were months of planning, endless emails, weird shopping lists, moments of insanity and so many risk assessment forms that we risked paper cuts, but we finally did it. 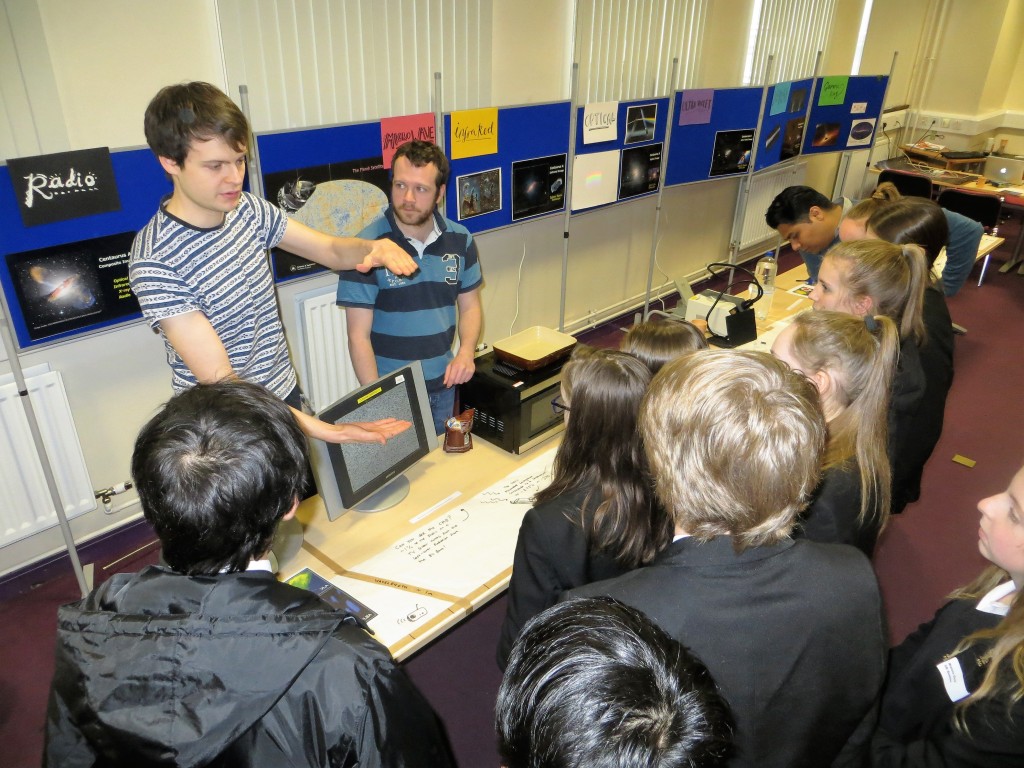 The invisible meteorite demonstration is always a big hit.

The day was packed full of space themed activities, introducing the students to many different aspects of astronomy and space exploration. In our “Exploring the Solar System” session the groups took inspiration from Matt Damon, designing their own Martian base and figuring out how they would adapt to survive on the Red Planet. This was followed by a Mars landers competition, where the mission was to protect their cargo (um, egg) from a 3 storey test impact!

In our “Extragalactic” session teams journeyed through the electromagnetic spectrum, learning how astronomers observe galaxies at different wavelengths. They then took part in the citizen science project Galaxy Zoo, using real data to classify morphological types. The session concluded using an Occulus Rift virtual reality headset to take a spin through the cosmos, exploring results of the cosmological simulation EAGLE. Lunch was also busy, with an opportunity to learn about gravitational lensing and study meteorite samples. 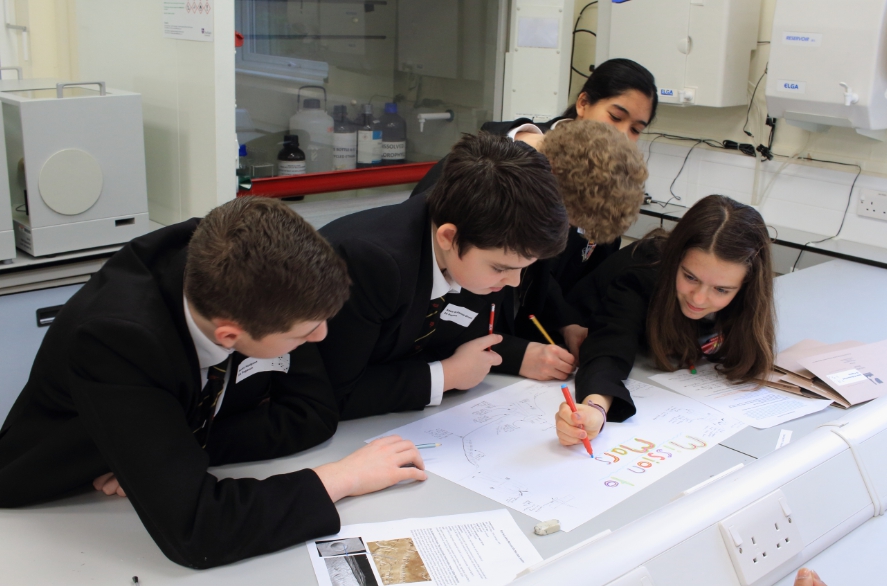 Designing a Mars base inspired by The Martian. ‘Remember, Matt Damon will need somewhere to grow apples so that he can ask college students if they like them or not’

One of the highlights of our day was chatting to Juno project scientist Steve Levin live from NASA’s Jet Propulsion Laboratory. Mission Juno is currently en-route to Jupiter and will arrive this July, exploring our solar system’s largest planet in unprecedented detail. Students were able to put their questions to Steve via Skype, and he gave us fantastic insight into the mission and what his team hope to discover. After a quick break we rounded off the day with shows in our inflatable planetarium and a visit to the department’s rooftop telescopes.

Although one school couldn’t make it due to poor weather conditions, the rest of the day ran smoothly and was amazing fun. The feedback we received was overwhelmingly positive, with ~ 95% of students rating the statements “I enjoyed today’s event” and “I am keen to attend future events like this” with a 4 or 5 out of 5. One student even said they would prefer fewer break times! I am very grateful to I’m a Scientist for helping to make this all happen, and I hope we can use equipment bought with the prize money to engage with many more students in the future.

See what the Durham Physics outreach team are up to

Investigate the EAGLE computer model of the universe

If you’re up for the I’m a Scientist challenge, apply now the next event by Monday 2nd of May

Posted on April 27, 2016 by modantony in IOPWinner, Winner Reports. Comments Off on What Helen Johnson did with her prize money…