What Jess Wade did with her prize money…

Jess was voted the winner of Colour Zone in June 2015. Here she tells us how she immediately got to work using the prize money for her own outreach event: a day bringing girls into her department at Imperial College London…

Last year, I got involved with Greenlight for girls’ mission to inspire girls of all ages and backgrounds to pursue STEM subjects after helping out with their events in Brussels. We then started dreaming about their first UK adventure, and with help from the I’m a Scientist prize money, pretty quickly that became a reality. 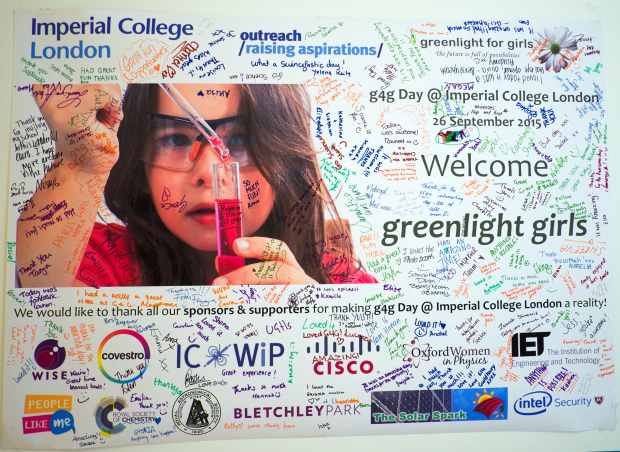 Our g4g banner signed by every girl who attended!

On Saturday 26th September, Imperial’s Department of Physics went ‘swipe-free’ 09:00 – 10:00, and welcomed 200 girls into the Blackett Laboratory for the first g4g London. This was an epic organisational triumph: a cross-campus multi-department effort to encourage and inspire 12 – 16 year old girls to study science, technology, engineering and maths.

The day itself came after a week of sleepless nights and endless to-do lists. I printed so many lists of contact details and registers and conformation e-mails and room reservations I got myself logged out of my college print service because of unusual usage. I sent so many ‘BCC’ e-mails gmail thought I was spam. I changed my Tesco order so many times even they must have thought I was mad: madly adding croissants, gluten-free muffins, vegan breakfast bars and wipe-able tablecloths until close to the 23:45 cut off on the Friday before. 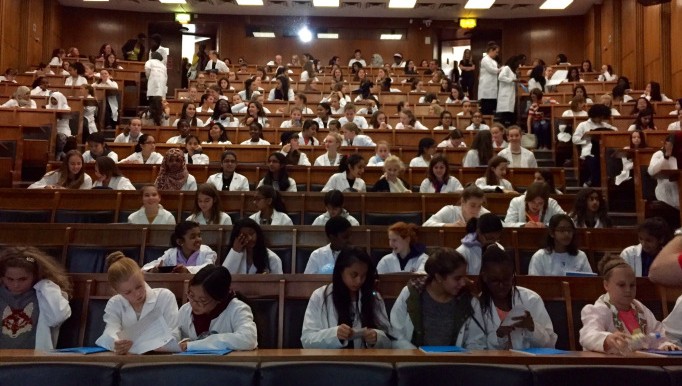 The girls settle into LT1, a place I’m sure many will back very soon

On the day, the girls arrived at 09:00 on the dot. They’d come from over 30 different schools and most of them didn’t know each other. The girls streamed into LT1 and, for a few hours at least, men were in the minority in the Physics Department. I gave a little talk and bigged up the place and people that made me: South Hampstead and my mom, who was sitting in the seat I sat in for my whole undergraduate education, up at the back, in an aisle.

In the build up to g4g day London a lot of names were thrown around to do the opening talk: the go-to guide for impressive female speakers. Dr. Emily Mayhew popped up on almost every list, and she did not disappoint: wowing the girls with her knowledge of medical fractures, female discoveries and difficult spellings, before their first workshops of the day. 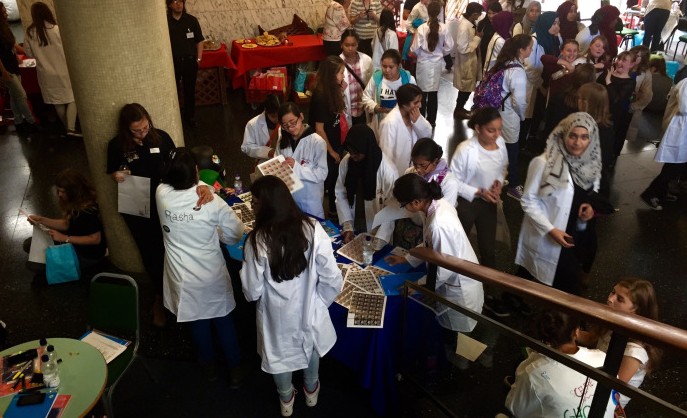 The girls take over the Blackett Laboratory between workshops

The rest of the day seems a bit of a blur, rushing around campus collecting swipe cards (I was cautious of the £20 penalty on failure to return), diligently collecting kit, melting cheese in microwaves, raiding the cleanroom stores for absorbent towel, popping balloons, chatting to girls I’ve spent weeks talking to in cyber space.  After final workshops the girls regrouped in LT1 to hear from Lucinda, the ICU president. Lucinda is GREAT- she’s a passionate public speaker with a brilliant plan to represent science in politics. 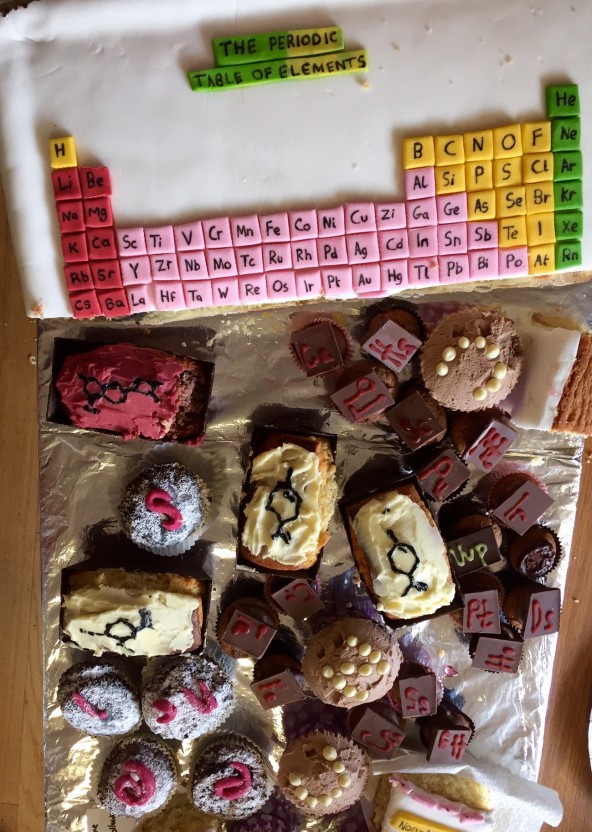 Some of the delicious, and accurate, Bakeoff entries. Thank you to Professor Sara Rankin for the idea!

The day came to a close with the Blackett Laboratory’s first public Bake Off, with entries from  girls, workshop leaders, Imperial staff and senior academics. It was truly a masterclass in molecular gastronomy- with cakes representing volcanoes, hydrocarbons and brain surgery.

And we had done it. Two hundred girls had made friends, made discoveries and changed their plans for the future. Every single girl I handed a goodie bag too said she wanted to apply to Imperial. The youngest wanted to know what they’d have to get in their GCSEs to come here. The oldest students were already imagining their first days in halls, where they’d eat lunch and which union clubs they’d join. I cannot believe how much of a success it was- or how much all the volunteers and workshop leaders seemed to get out of it. The tweeting was immense, the spontaneous feedback has made me teary-eyed and the enthusiasm empowering.

These are girls who want to become civil engineers, design their own apps and run their own research groups. These are girls who will. Every single organisation represented at the event want the skills these girls had- the passion, the charm, the capacity to collaborate, the drive. These young women need to be celebrated, supported and encouraged. These young women will change the world.

What have I learnt from the whole thing? I think I learnt what most people mean by ‘collaboration’ and how hard it is to get people to do things for free on a weekend- absolutely no budget and no staff privileges meant I had a one month self-taught crash course in event planning/conference organising/crowd control/schools liaison, all the time struggling to keep out of the watchful gaze of my supervisor. 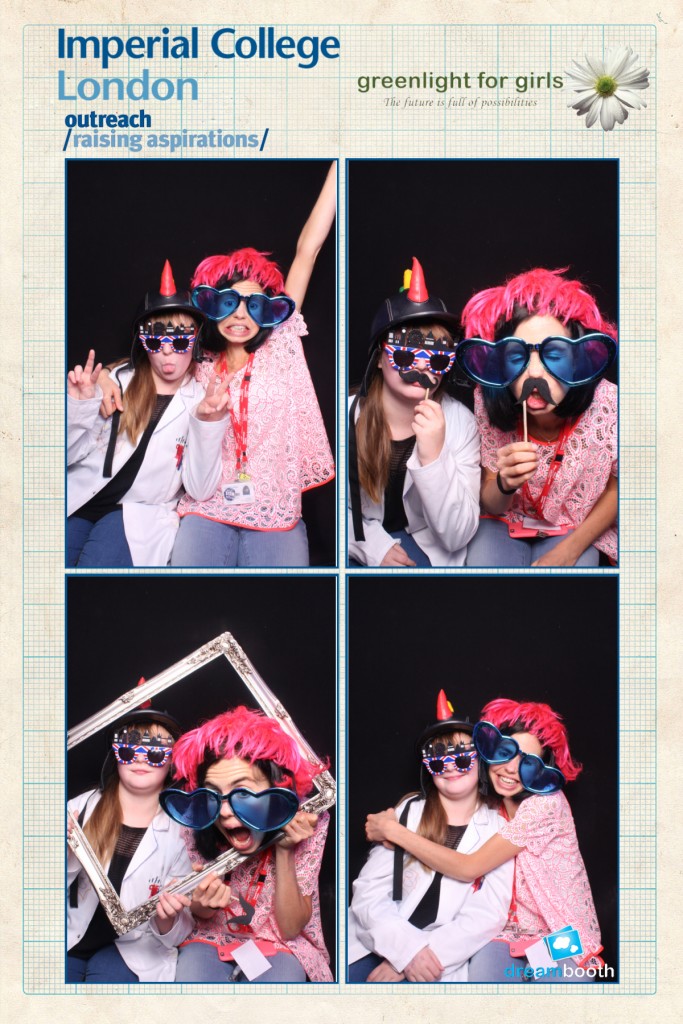 I also learnt that it’s important to be nice to people- especially when you’re asking for things for free! The ‘more girls in science’ pitch sales pitch is pretty compelling and usually when you explain what your plans are people are more than willing to donate their time, resources and efforts to such a worthwhile cause: but not if you aren’t polite or clear.

Arranging an event on campus is a BIG deal. You need to get departmental approval, security approval, faculty approval. You have to consult the college brand to see how you’re supposed to use the Imperial College logo, then break every rule in the book and change the colour. You have to have a pretty big name on the booking form to avoid paying thousands of pounds to rent lecture theatres on the weekend. Lots of people just don’t e-mail back, and lots of places still prefer phone calls (especially learned institutions and academies). Ultimately, everyone at the end of the electronic postal system is a human, and each one of those humans wants to know what you want them to do, or send, or design.

To run g4g day @ Imperial College London, I had to sweet talk an awful lot of people into doing an awful lot of things for free. But there are somethings that even that can’t cover! In the end, my I’m a Scientist prize money ended up covering the 250 custom designed beautiful bright blue books for the girls to detail their findings in over the course of the day and a very popular science Photo Booth. Actually, these parts of the day alone are most commonly brought up ‘post-event’, with Imperial’s Outreach Department and the Institute of Physics trying to arrange similar things for their events… so it was money well spent! I also really enjoyed speaking to the teachers that attended about how fun it was to take part in I’m a Scientist (and filling their bags with flyers). Rarely a day goes by when I don’t sing I’m a Scientist’s praises in some form!

Read Jess’ full account of organising the g4g day on her blog Making Physics Fun, which is full of useful tips on setting up outreach events at university.

See the full list of the workshops held on the day here.

Find out more about Greenlight for girls and their g4g Days at www.greenlightforgirls.org

Posted on February 17, 2016 by modantony in RSCWinner, Winner Reports. Comments Off on What Jess Wade did with her prize money…