I’m a Scientist – Live! at the Ridgeway School for STFC Bringing Science to Swindon programme 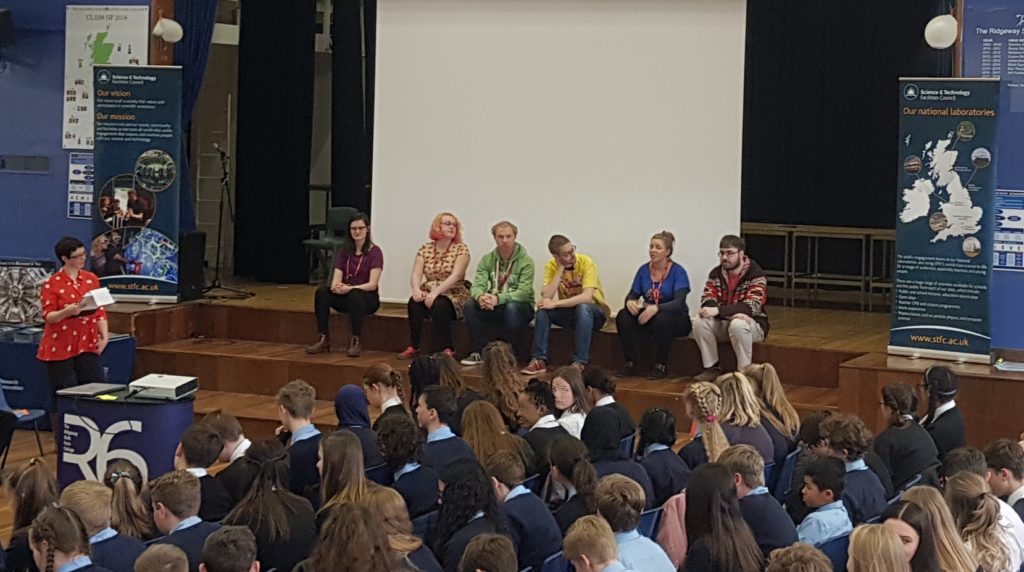 On Tuesday 19th March two shows of I’m a Scientist – Live! came to the stage of the Ridgeway School as part of the Science and Technology Facilities Council’s Bringing Science to Swindon programme. The event helped STFC reach a new audience and engaged school students with the people behind the science funded by UK Research and Innovation (UKRI) councils, all based in their hometown.

They put their questions to 12 members of the UKRI community, between them representing STFC, EPSRC, BBSRC, NERC and MRC: scientists, engineers and staff from the research council head offices at Polaris House.

“Which one of you is the smartest?”

Marshalled by the MC Helen Arney, these brave competitors were faced with questions from the students such as:

Each strived to impress the audience with their answers, often debating or disagreeing with responses from their fellow competitors.

At the end of each show the students voted for the person who had most impressed them and deserved the prize of a £100 donation to a charity of their choice.

In total, there was time for 11 student questions to be answered. After each show, many students took the opportunity to speak to the scientists one on one.

What the students thought

Students were asked for their views on the show they watched:

Teachers at Ridgeway School said: “(The students) had great fun attending I’m a Scientist: Live while also improving their scientific knowledge and gaining an invaluable insight into the life of a modern-day scientist.”

Reflecting on how it went

The Live! format is clearly an entertaining show that gives an insight into real scientific research and the people making it happen. However the format only allows for a small percentage of the audience to have their questions answered. It also takes bravery to stick your hand up and ask your question in a crowd of 100 peers (even for adults) and occasionally it was a struggle to get a question from students.

But students do have lots of questions, as shown by the numbers lining up to talk one on one with competitors after the shows. Competitors who had also done the online version of IAS commented on how students felt more comfortable volunteering questions in that format. In future we could open an online zone to accompany the event where students can get answers to the questions they weren’t able to ask during the show.

Effort was made to recruit competitors who worked for research council head offices at Polaris House and priority was given to researchers with connections to the local area. This seems to have paid off as Mousam Rai, who grew up in Swindon, was voted the winner of his show.

Chris Carlton, Projects Peer Review Panel Secretary for STFC works at Polaris House and had even gone to the Ridgeway School as a student. This was his first engagement activity for school students, and beforehand was slightly unsure whether he would fit the event format given his non-research role.

Afterwards Chris said “I thought the event was great fun and really connected with the important part of what we do at UKRI which can sometimes be forgotten. I was also pleased at the amount I was able to contribute as there were lots of general questions…. I was very pleased by the friendly and collaborative vibe which was generated which certainly helped in settling my nerves.”

Focus on the questions

The format includes an introduction and ‘science fact or fiction’ introduction segment for each competitor. In this case, with 6 competitors each time and only an hour for the show, this meant there was less time for audience questions and discussion than we would have liked.

In future, with this number of competitors and a similar time frame, we would shorten the intros and get to the question section faster.

We’d like to give a huge thanks to all the competitors for giving their time to take part, and our fantastic MC Helen Arney. Thanks also to the staff at the Ridgeway School and Di Bulley at Swindon Borough Council who organised the venue and schools impeccably. Finally, thanks to our partners at the STFC for supporting the event as part the Bringing Science To Swindon programme.

Read the news post from the Ridgeway School about I’m a Scientist -Live!

Posted on March 28, 2019 by modantony in Evaluation, I'm a Scientist - Live. Comments Off on I’m a Scientist – Live! at the Ridgeway School for STFC Bringing Science to Swindon programme