Taking part in I’m a Scientist, Get me out of here  and I’m an Engineer helps to develop and support students’ science capital through providing the opportunity to meet and engage with science professionals, regardless of a student’s background or location.

Valuing student contributions and getting to know people in science

Students participating engage in sustained and enthusiastic interactions with professional scientists, an important point given young people are more likely to consider science as ‘for them’ if they know people in science. We believe I’m a Scientist captures the spirit of making scientists much more relatable.

Students lead the conversation through CHAT and ASK where they ask scientists’ about their motivations, achievements, and interests often finding areas of commonality. Through VOTE, students research scientists and their work and consider what it means to be a good scientist; students have ownership over the activity in that they choose who gets the £500 prize.

Through participation, students develop knowledge and understanding on scientific topics, processes and their relevance to real life. Students also develop confidence in feeling they know about science and that they can ask questions to develop this knowledge further. In this way I’m a Scientist contributes towards bridging the perception of an ability gap when it comes to science.

Knowledge about the transferability of science

Though in general, zones focus on practicing scientists and engineers (something we are actively trying to make more diverse), often questions centre whether students should continue with science-based subjects, even if they do not want to become scientists. 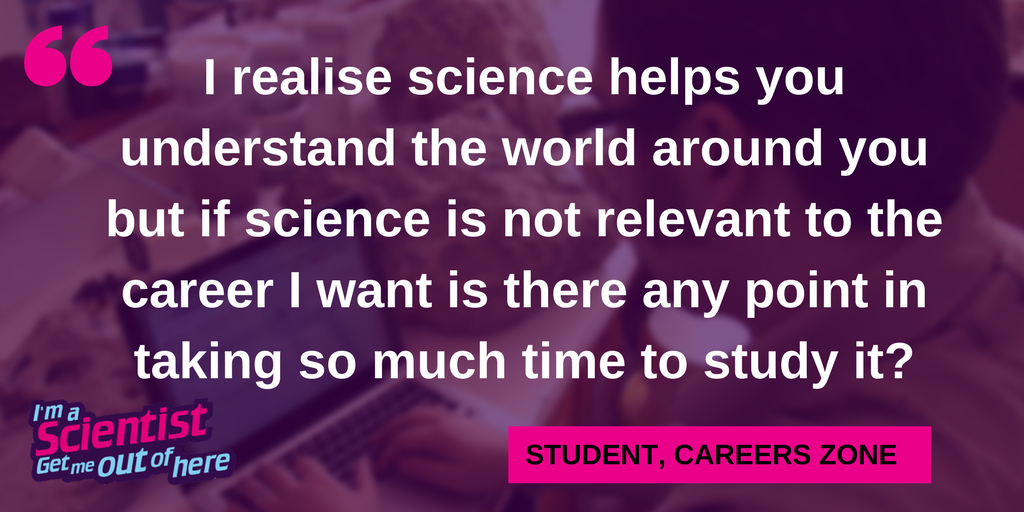 Click on the image to see the experts’ answers

Whilst not every student will become a scientist, all students will become citizens, voters and decision making members of the public. I’m a Scientist helps young people link science with the real world and consider ethical issues and the wider societal context of science.

Through I’m a Scientist, Get me out of here we believe that we make a tangible difference so that all those who value science, and perhaps even some who don’t at the outset, feel that they could in fact be scientists, use science in their futures or simply understand the world in which we live in.