Hi everyone, here’s a summary of how the March 2009 event went (PDF download). I was supposed to write a couple of pages so of course it’s 12 pages long (I’m the same with cooking – if I have a couple of friends round I make enough food for ten and we’re eating leftover curry ’til thursday…). Fortunately Shane (my boss) is busy being terribly important in London running his G20 bloggers tent, and hanging out with Bob Geldof (pictured), so he can’t tell me off about it. 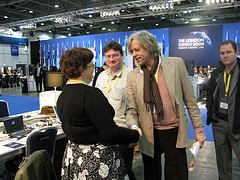 Shane (just behind Sir Bob) at the G20Voice

What we found was pretty similar to the pilot (but it’s important to check everything is still working:-)). One of my favourite quotes was the one I used as the title. Students were over and over amazed that ‘scientists are just like real people’, and that they were taking time to talk to young people. They also couldn’t quite get over that we were giving them a say about something, “[I liked] being able to vote as a child and make a difference.” I find that quite moving – we all want to make a difference, don’t we? Do we give young people so few opportunities for doing that?

As for the grown-ups, all the scientists and all the teachers (who filled in the feedback survey) would take part again, and recommend the event to a colleague. Everyone enjoyed taking part, the scientists developed their communication skills and got inspired about public engagement, “I got a tremendous amount out of it, and I think I probably learnt a lot more from the students than they learnt from me!”, and the teachers felt their students benefitted enormously.

The key elements mentioned, once again, were:-

But looking through all this data has confirmed for me again how important each of the elements is and how they work together.

For example, one thing that works is that live chats are an intimate and familiar medium for young people – so they can ask questions when they might normally be shy in class. But it’s the fact that they have a real decision to make about real science, primed by appropriate classroom discussion exercises, that gives some purpose to that conversation, and means it’s not just students asking what nipples are for.

We can’t claim this is entirely due to our genius as event producers (although I’m sure it’s a factor;-)), it’s also to do with the organic way I’m a Councillor, and then I’m a Scientist have developed*. We’ve seen what works and what doesn’t as we’ve gone along and built the event up. We also owe the biggest debt of gratitude to the teachers, scientists and young people who’ve helped us. Thank you everyone! I was going to talk about that lots more, but I have to go and catch a train to see my baby sister’s band play so it will have to wait for another time. Have a great weekend everyone!

*I particularly like how this theory confirms all the prejudices of my biologist worldview: Evolution, much better at engineering than engineers are.

Posted on April 3, 2009 by in Evaluation, IAS Event. Tagged Evaluation, March 2009, thanks. Comments Off on These scientists were just like real people!

0 Responses to These scientists were just like real people!