I’m a NeuroScientist LIVE – And the winner was… 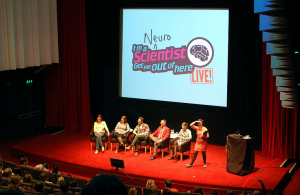 At £5 a ticket, audience members – 35% scientists themselves and the rest members of the public with an interest in science – were keen to have their brain questions answered by the experts. Questions included I’m a girl, I can read maps but I can’t multitask – am I broken? and can stress ever be good? 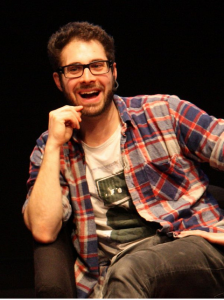 At the end of the evening Mark Horowitz walked away with the trophy after some great answers on how stress and depression affect us.

Lauren Stewart won the fact or fiction round, fooling 27% of the audience into believing that listening to Mozart makes you smarter, when actually listening to music increases milk production in cows. We also learnt that it’s a myth that we only use 10% of our brains, if people were neurons our brains would be the size of 12,000 Londons, the adult brain can grow new neurons, and mitochondria don’t communicate with us through our dreams!

Over 88% of the audience enjoyed the show and 97% said they learnt something, so we’d class that as a pretty successful event – looking forward to future live I’m a Scientist shows!

Take a look at our photos from the whole event – from the heats through to the final: