A question I sometimes get asked when I tell people about I’m a Scientist, is how do we choose which zones to run? In short: we ask teachers what they’d like.

In July we emailed all the teachers signed up for I’m a Scientist to ask them what zones they’d like to see in our next three events: November 2013, March 2014 and June 2014.

Just over 40 teachers filled in each survey by ticking as many of the 40 zone choices as they’d like (some are zones we’ve run before, others are new).

Which zones came out top? 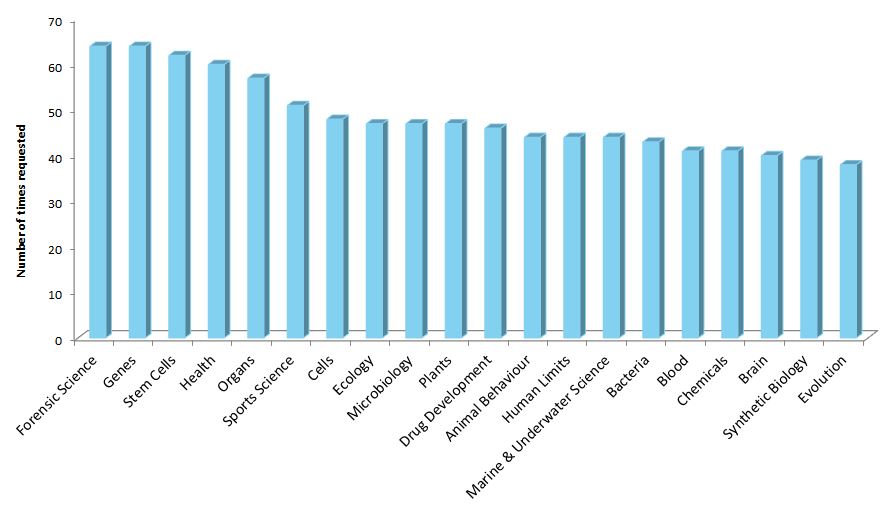 The graph shows the top 20 zones, by the number of teacher requests across the 3 surveys for November, March and June. Forensic Science and Genes zones came out top, closely followed by Stem Cells, Health, Organs and Sport Science. Most of the top requested zones are biomedical; this might be because there are more Biology teachers on our list, due to the majority of funding coming from the Wellcome Trust since 2008.

When to run these zones?

What’s more interesting is the variation when teachers want to see certain zones, reflecting when topics are taught in the school year.

We’ve used this feedback to choose some of the zones we’ll run over the next year in advance. This will help us plan teacher and scientist recruitment throughout the year. STEM contract holders have also told us it’s useful to know dates and zone themes in advance.

And sad news for any linguists out there, I don’t think we’ll be running a Language Zone any time soon. With only four requests there just isn’t the demand.

A taste of the themed zones running over the next year is at imascientist.org.uk/2013/10/im-a-scientist-zones-november-2013-june-2014. We’ll add more themed zones from other funders to the mix nearer to the events.

Posted on October 30, 2013 by in Evaluation, IAS Event, News. Comments Off on Using teacher feedback to plan future themed zones