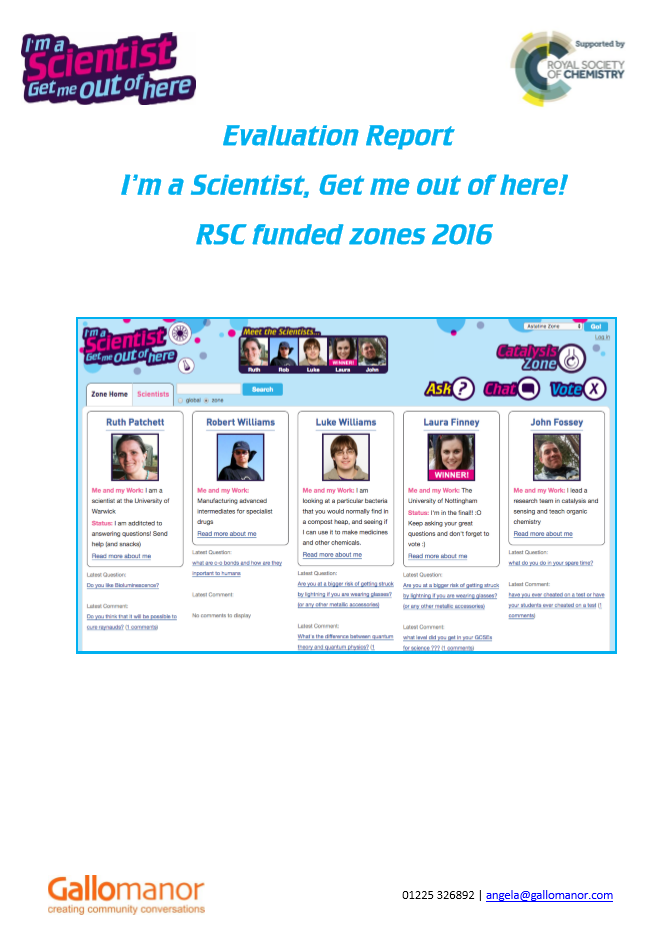 In 2014, the Royal Society of Chemistry (RSC) agreed to support I’m a Scientist over 3 years. Each year, they fund 9 zones across the UK and Ireland. Part of the arrangement is that we include five RSC members in general zones across the year to show school students the full breadth of science.

Below is a summary of our main findings after evaluating the 9 RSC funded zones of I’m a Scientist, Get me out of here 2016.

What students and teachers said about taking part:

Participating in this program, was a useful way to enhance my knowledge in my areas of interest…The scientists have all helped me to answer questions that I have been asking other people for a very long time. However, the major difference was that on this platform I received answers that clearly and fully answered all of my questions. Overall, this has been exceptionally useful to me and I look forward to more activities like this…” – Student, Antibiotics Zone

I’ve learnt how the children enjoy engaging with scientists and finding out about the world around them. An enjoyable, memorable learning experience”– Teacher, Climate Change Zone

Despite the success of the zones in 2016, due to changes in strategy decided by the Council of the RSC, the Society will not be funding the event in 2017 as planned. However, there are 94 Royal Society of Chemistry members registered on our scientist lists, waiting to take part in I’m a Scientist, and chemistry topics are the most popular among teachers. This change in strategy from the Royal Society of Chemistry means that the strong demand for online engagement with chemistry will be left unanswered this year.

Posted on February 20, 2017 by in Evaluation, Evaluation Reports. Comments Off on Royal Society of Chemistry funded zones 2016