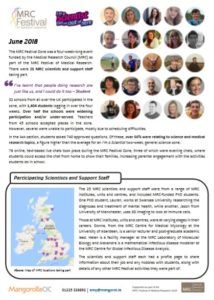 32 schools from all over the UK participated in the zone, with 1,404 students logging in over the four weeks. Over half the schools were widening participation and/or under-served. Teachers from 45 schools accepted places in the zone. However, several were unable to participate, mostly due to scheduling difficulties.

In the Ask section students asked 740 approved questions. Of these, over 50% were relating to science and medical research topics, a figure higher than the average for an I’m a Scientist two-week, general science zone.

76 online, text-based live chats took place during the MRC Festival Zone, three of which were evening chats, where students could access the chat from home to show their families, increasing parental engagement with the activities students do in school.