I found a lot of students were asking questions that weren’t directly related to my work, so initially I kept quiet, but then talking about it with Hannah and the other scientists, and reflecting on the Academy Zone questions made me consider my work in terms of ‘social influence’

Formal public engagement (PE) training has been characterised as lacking uptake and mainly aiming ‘to increase participation in public engagement’, rather than improve the quality of engagement activities (State of Play report, 2016). As a researcher, actually improving your public engagement skills mainly happens informally, ‘on the job’, i.e. just before or during a school workshop, or through seeing how other people do it. There is often little time for reflection (ChallengeCPD@Bath report, 2018).

As part of the ChallengeCPD@Bath project, last year we showed that engaging with school students in I’m a Scientist (IAS) functions as effective, accessible, experiential learning, especially for communication skills.

We wanted to further improve IAS as a training opportunity for researchers. The Academy Zone was created to help participating scientists better understand principles of good public engagement through reflecting on their IAS experience while it was happening. The ultimate goal: help build capacity for effective, high quality, public engagement in the research community.

Aims and Objectives of Academy Zone

Academy Zone functioned as an extra zone invited scientists had access to during the June 2019 event. Through the zone we aimed to:

Our objectives for the pilot were: 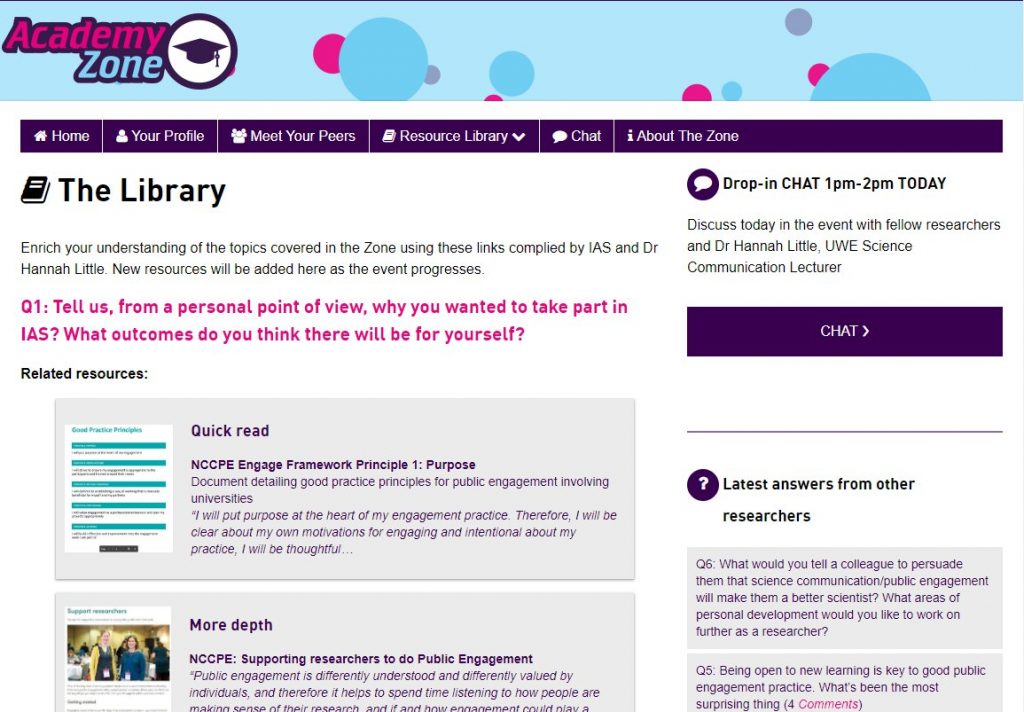 We worked with Dr Helen Featherstone of the University of Bath Public Engagement Unit and Dr Hannah Little of UWE Science Communication Unit to develop the format and content.

Questions:
Every couple of days, researchers were sent a question to help them reflect on and think critically about public engagement while doing IAS. The questions related to the NCCPE Engage Framework and Science Capital.

Resources:
Links to external resources and further reading related to each question, such as:

CHATs facilitated by Dr Little with the aim of initiating reflection and peer-to-peer learning between ECRs. 8 chats were scheduled on weekdays, initially held 8-9pm from the first Tuesday of the event.

To complete the Zone, and receive a certificate evidencing their CPD, ECRs had to answer all questions. These answers then function as a record of their learning they could access in the future.

8 of 14 researchers completed the Academy Zone

11 of 14 researchers were active

After the IAS event we asked researchers what they had found beneficial about doing Academy Zone alongside engaging with students. We also looked at their answers for evidence of learning and reflection.

“…when you’re in chat sessions with the kids there’s a lot of different questions flying about, some relating to your research, some not, so you don’t really have time to think about your responses. I found a lot were asking questions that weren’t directly related to my work, so initially I kept quiet, but then talking about it with Hannah and the other scientists, and reflecting on the Academy questions made me consider my work in terms of “social influence”, and not just about the theory and topic I’m specifically researching. So I was thinking how I engage with these kids… and I think there’s space in the Academy Zone to do that, to reflect on how you respond to the kids.
– Ian, PhD researcher

“It was a great opportunity to really think about what I was getting from the event and how it differed compared to other outreach I’ve done. I think without Academy Zone I wouldn’t have actually sat down and thought about the various types of outreach and the pros/cons of each!
– IAS event Survey response

The Academy Zone gives you a chance to step back and think about why you are taking part in I’m a Scientist and what you aim to get out of it yourself, as well as from other public engagement and outreach events. It gave me more perspective on exactly why I wanted to take part and gave me points to consider when planning future activities.
– Savannah, PhD researcher

Taking part in the Academy Zone has helped me to become more aware of what public engagement and outreach entail. It also got me thinking about how my own research could be the basis for designing and implementing PE/O activities. Since taking part in IAS, I have more seriously considered getting involved in PE/O activities and have looked at potential funding options.
– Bogdana, Lecturer 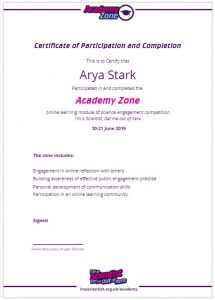 Researchers learnt from their peers

Researchers who completed the Zone received a certificate

“I’ll definitely add IAS to my CV – both the event and the Academy Zone… The certificates themselves are going in my office and will be useful if anyone ever asks for evidence of outreach / personal development stuff.”
– PhD Researcher

The zone facilitator noted that answers from researchers were often detailed and showed critical thinking.

Question: I’m a Scientist uses a mainly text-only online platform. How do you think this part of the design is helpful for students trying to engage with scientists like you and your fellow competitors?

I think there are several advantages to using the text-only online platform in IAS.
(1) flexibility – students can post questions (in ASK) whenever they want. It doesn’t restrict their curiosity to a certain time slot (say a particular class in school)
(2) anonymity – students cannot be identified by name and probably that encourages them to ask questions even though they might worry that these are silly, because these can’t then be associated with them
(3) clarifying ideas – I think that asking questions in writing requires students to clarify their own ideas probably to a larger extent than if they formulated the questions verbally
(4) interactivity – the CHAT sessions enable students to interact live with scientists, to ask questions to which they get personalised answers
(5) low-pressure – I presume face-to-face discussions with scientists would put more pressure on students to ‘do well’ and not embarrass themselves, so the ‘remoteness’ might help in alleviating some of their performance anxiety

Question: Being open to new learning is key to good public engagement practice. What’s been the most surprising thing you’ve learned, about yourself, how to communicate or about the students themselves?

I would really say it is key to write for your audience and even if you think you have written at a level that is appropriate to them it is good to adapt further. I had quite a few students who missed the idea that I study bees because I had the word raspberry in my title, further review of my title is therefore needed to be unambiguous to all viewpoints.
The text chat and getting 20 questions about raspberries has really shown this and when I adapted my title the number of students asking about raspberries dropped to about 1/2 per session… As a result of I.A.S if i do anymore engagement I will most certainly devote more time to making sure that whatever i am presenting is unambiguous to all parties and tailored to the exact message I want to communicate

Learning for next time

Academy Zone will be available for researchers taking part in the next IAS event in November 2019. We plan to:

Posted on July 25, 2019 by modantony in Evaluation, News, Scientist Benefits. Comments Off on Reflecting on I’m a Scientist participation: Academy Zone pilot