Each year the RI run a youth summit on a subject related to the CHRISTMAS LECTURES. The Summit takes place at the RI and consists of a series of talks, and provocations in the Faraday Theatre interspersed with breakout sessions in various rooms around the building.

In 2020 it was decided to run the Summit prior to the filming of the lectures so that the views of the delegates could be communicated to the lecturers. However the Covid-19 pandemic intervened and the RI building remained closed to the public.

The decision was taken to bring the summit online and I’m a Scientist was chosen as the platform because of a strong record of safeguarding and working with the RI on the Lectures.

The Summit was scheduled for October 16th 2020.

In  summary he said:

The Youth Summit appeared, based on the interactions and initial feedback to be a rewarding and engaging experience for the young people who took part. The I’m a Scientist team has developed a simple but effective platform which can help facilitate dialogue online. The platform uses the same heavily relied upon communication methods many have come to know through social media platforms, message boards and SMS messaging. It is known that such technologies when effectively moderated can contribute to emotional and social well-being and can provide a safe environment for learning and challenging perspectives.

A feedback form was provided for delegates.

Please enter your opinion on the following statements using the scale below. Blue is Strongly Agree and Orange is Strongly Disagree. 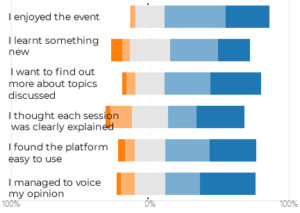 Select quotes in response to being asked what one thing would they remember from the day: