What Ali Hill did with her prize money… 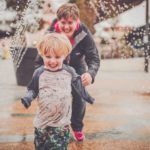 Ali was voted the winner of the Food Zone in June 2018. She writes about how she spent her £500 prize money to help teach people about nutrition.

If you’d like the chance to win funding for your own public engagement work, apply for the next I’m a Scientist, Get me out of here: imascientist.org.uk/scientists

I spent the prize money on creating a series of resources to help explain nutrition science, and get people talking about what’s in their food. I bought some knives that are safe for under 18s to use in the kitchen, and regularly use these for cooking classes.

I also bought some multimeters, which we use to show why certain drinks are better than others at replacing the electrolytes we lose in sweat when we exercise. £450 was spent on equipment, and £50 on a stall holder fee at the Southampton Healthy Living Festival.

One of the most popular resources I made were the “Sugar Wheels”, which were based on an idea from Hugh Fernley-Whittingstall. They consist of two prize wheels, which people spin and then guess how much sugar is in the drink. One wheel has smoothies and fruit juices on, and the other has fizzy drinks. People are always amazed how much sugar is in the drinks they thought were healthy!

Posted on July 9, 2021 by in WellcomeWinner, Winner Reports. Comments Off on What Ali Hill did with her prize money…