The students decided. And the scientists spent the money. 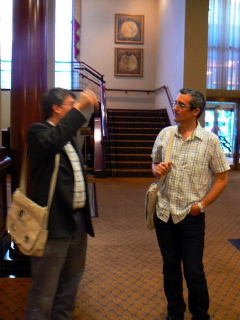 Ian at the International Conference on Traffic and Transport Psychology in Washington DC. Note the bags!

During I’m a Scientist students voted and decided which scientist they wanted to give £500 to. It’s very powerful that the event gives young people a real say about something: it makes the whole thing much more real and vivid and makes them feel important. As one student said, “[I liked best] how it was totally up to us and not influenced by adults.”

Students probably also want to know what happened next, so they can see the effects of their choice. So I’ve asked our winning scientists to tell me. Jenny and Ian’s answers are below. Nick is away at a conference, but promises he’ll tell me when he gets back. Those of you who are teachers might want to pass this on to the students. It could be a good chance for them to learn a bit more about How Science really Works. As well as keeping them informed.

I have spent half on developing resources for going into schools to teach about climate change – developing lesson plans and games etc which once I have tested them all out I will be giving to the Royal Meteorological Society to put on their website for meteorologists to use when we go into schools to teach and hopefully for teachers to access to help them teach. Here’s a link to the great resources already online at the Royal Meteorological Society’s website for schools.

I’ve just got permission to go to Nairobi in Feb to help them develop forecasts for the March-May rainy season so the other half of the money will go towards my travel to get there to help there. Will send you photos of that once it’s happened (assuming the security situation there is still fine in Feb of course).

It’s such a worthwhile and successful scheme. [The students] were a great bunch and really wanted to learn from and about us, very enthusiastic.

The money went towards attending the International Conference on Traffic and Transport Psychology in Washington DC. It was a really useful meeting and I gave no fewer than three speeches, so there was value for money if nothing else! The only photo I really have (shown above) is pretty poor, and shows me talking to a NZ government chap in the hotel foyer. Very exciting. But at least we have conference bags!

Some students didn’t understand about conferences when they were having live chats with the scientists, they thought it was just a sneaky way to use the money for a holiday! Perhaps teachers can explain:-

Lots of bits of science there are only a few scientists studying that specific thing. Conferences get scientists from different parts of the world who all work on the same thing together. Scientists explain the research they have been doing and the other scientists ask them questions. This means that everyone can swap information, learn from each other and pick up tips. The scientists also sometimes argue with each other about what things mean and test each others’ ideas. This getting together is important and helps science to be an international collaborative effort.

Conferences are really important for helping all the world’s researchers in a given field to stay up-to-date with what’s happening. Also, perhaps more importantly, this conference had a lot of government people and transport practitioners there (i.e., the people who actually make use of the science), which meant it was important for telling them what we’ve found out. As it happens, this particular conference was an excellent one and I’ve started a new international collaboration off the back of it, as well as making various new and useful contacts.

The networking side of conferences is also really important.  The scientists (from all over the world) get to meet each other and get to know each other a bit. This means it’s much easier for them to work together and swap information. After all, if you realise you don’t properly understand what the homework is, you’re much more likely to phone your mate and ask them, than ask someone you’ve never talked to, aren’t you?

I’ll let you know what Nick did with the money when he gets back from his holiday conference in the States.

Posted on December 4, 2008 by in IAS Event, Scientists. Tagged conferences, feedback, prize money, Royal Meteorological Society. Comments Off on The students decided. And the scientists spent the money.