How DOES magnetism work? 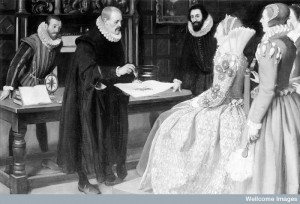 He doesn't know either: Gilbert demonstrating the magnet before Queen Elizabeth /Wellcome Images

Last year I saw A C Grayling talk on happiness and it’s importance. He said that he bans his students from using the word ‘happy’, that it’s a lazy portmanteau word. He thinks that if you are forced to choose a different word – hopeful, exhilarated, content – you’ll think about what you really mean far more clearly.

I think the same can sometimes be true of jargon. Scientists taking part in I’m a Scientist have told us before that explaining yourself without using jargon is hard work, but unexpectedly rewarding. It means you have to think through what you mean and it exposes your mental shortcuts.

We saw a great example of this in Imaging Zone. A fairly innocuous-seeming question (Why do magnets attract and repel?) pretty much lead to the scientists realising that they don’t actually know how magnets worked. Not really. Not when they tried to actually explain it to other people, without using jargon.

Now these scientists include a man who spends many of his days working with an fMRI scanner, containing a magnet so powerful that you have to remove any ferrous object from your person before entering the room. But still, magnetism turned out to be one of those things that he learned about years ago, and sort of assumed he understood.

I’m expecting that some of you have the same feeling I did when reading that Q+A – ‘OMG, I don’t REALLY understand how magnets work either. How did I not notice that before?’ I think the thing is, most of us rarely discuss how magnets work. And when we do, we use technical words (‘dipole’, ‘electromagnetic’, ‘electron shell’) which we and our listeners all know, which can obscure the fact that you don’t truly understand the underlying mechanism.

By all accounts this question, and the attempts to answer it, lead to an awful lot of magnetism-related discussions at scientific breakfast tables and coffee machines around the country. So, one outcome, of just this question, has been much thinking about and discussing the mysteries of physics, by scientists, with colleagues, and others, about a subject they all thought they understood, but actually it turns out they’ve got lots of questions about it.

If the essence of science is asking questions and taking nothing for granted, then I’d call this a result.

This post started life as part of a mammoth post I’ve been writing about how June’s I’m a Scientist event went. The post has taken about three days so far and we’re up to 3,000 words. So I thought I should really break it into bits and start bunging some up now.

2 Responses to How DOES magnetism work?