Any avid readers of our project blog — there must be at least one of you — will have noticed we’ve written a lot recently about our increasing demand for classes, and our over-subscription rates.

In January, we published some numbers. Since then we have run the March 2016 event, and finalised class places in the June 2016 event. Here are some updated numbers: 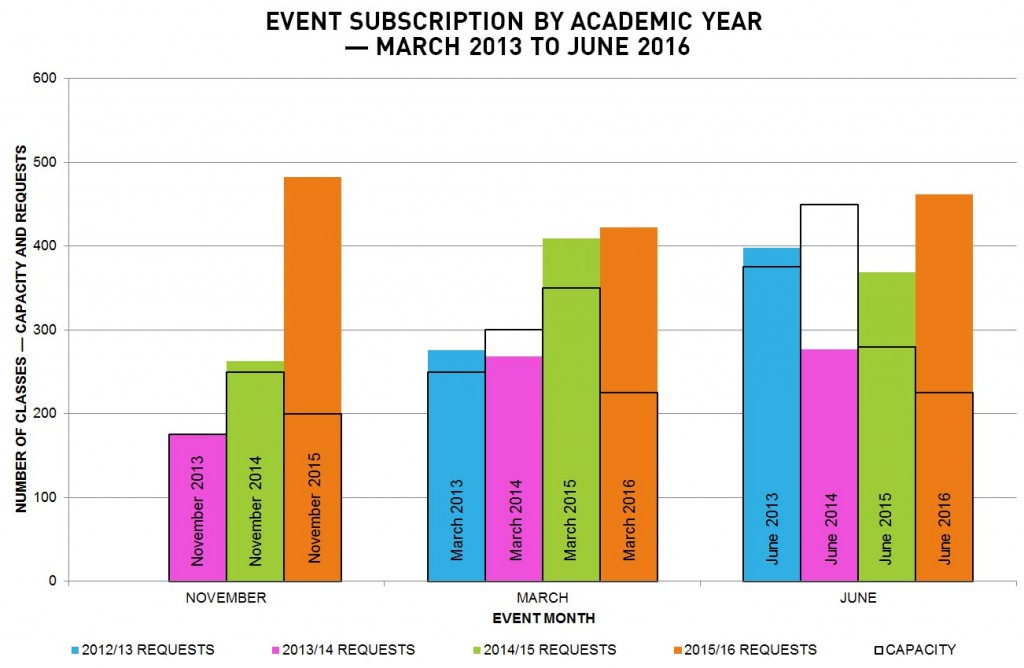 In January, we wrote about the decreasing popularity of the June events, with more teachers moving to November and March.

With the spectacular growth in November 2015, we speculated that teachers may be moving from March and June to earlier in the academic year. If that was true, then we would have expected a lower demand in March and June this year.

What we see is a steady increase in demand in the June events. The growth in March 2016 was perhaps less than may have been expected given that of previous years. This could support the idea that teachers are opting to take part in November instead of March. The narrative is not entirely clear though and we need to look into this a little more.

As was true in January, what is clear is the decreasing capacity for classes in all of the events. Though this does though coincide with an increased capacity in our other projects; with the demand for classes increasing we need to increase the capacity. We need more funding.

For the past year or so we have been charging international schools wishing to take part, generating a few hundred pounds. This June we began asking the same charge of independent schools. Overall, the response has been positive — which to be honest has been a pleasant surprise. There’s a separate post to come on that, but the fact that teachers are willing to pay shows they value the activity, and that this could be a valuable funding stream in the future.

Posted on May 23, 2016 by modjosh in Capacity, Evaluation, IAS Event, News, Project News. Comments Off on Demand vs. Capacity — An update for June 2016