“I thought scientists just looked like they do in the film Flubber and experimented on aliens or weird stuff but when I found out you liked Taylor Swift I realised you are more down to earth and not like mad scientist :)” – Student, November 2015

I’m a Scientist is about connecting pupils with real scientists. Something we want to find out is what effect this interaction has on different groups of students. Recent research by the Institute of Physics has done just that.

The IOP has carried out an independent research project to gain an insight into the behaviour and attitudes of boys and girls who do I’m a Scientist. As part of their Improving Gender Balance project, the IOP funded two zones: Terbium Zone and Osmium Zone.

The researchers anonymously surveyed the students’ attitudes to science and scientists before and after the event. We also provided them with all the student’s interaction data from the sites. Every line of live chat, every question in ASK. Specifically the researchers wanted to look for gender differences in two areas:

The first results from analysis of this treasure trove are now online at the IOP blog. 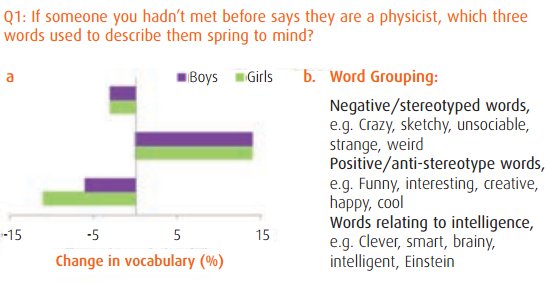 Physicist, know thyself: After the event, girls in particular reduce the negative words they use to describe you.

Check out the post for their full findings on the effects of taking part in I’m a Scientist, including:

Girls want to see the scientists as real people 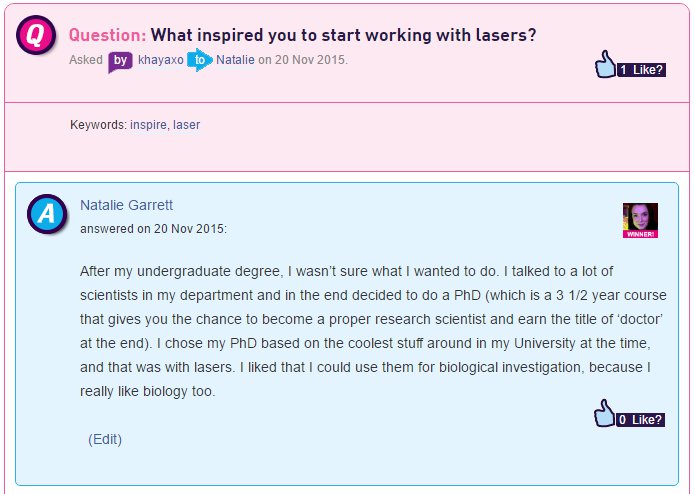 Click to see all the questions asked in Osmium Zone

The report also dissects what girls and boys want to know from the scientists. Interestingly, as well as asking more questions overall, girls seem to ask many more personal questions, asking more than boys about job satisfaction, the career goals and achievements of the scientists, and their motivation to work in science.

For us, the identified trends make sense. For example, a boisterous classroom culture can be a barrier for quieter children to engage with visitors. As Natasha at the IOP notes, ‘the online, anonymous nature of the live chats gives students more freedom to ask questions than a traditional careers talk or even a speed-networking-style careers event.’ Girls, as a group, seem to relish this freedom.

And we believe that for science to be appealing there’s no need to glam it up with explosions and ‘wonder’. The more students hear about the reality of science from people like them, the more positive they feel about it. This research backs up that view.

If girls are a group that benefits from this increased exposure to scientists as real people, it’s likely other underrepresented groups do too.

I’m a Scientist provides a unique way to study the ways children interact with scientists. We’d love to see more research being done using our data. If you think you, or someone you know, might be interested in analysing what hundreds of children want to know about science, just drop me a line at antony@mangorol.la

Read more on the findings in the full blog from the IOP: Online event gives insight into gender imbalances

And find out more about how Osmium Zone was set up: I’m a Scientist, not just for scientists

Posted on October 21, 2016 by in Evaluation, News. Comments Off on Gender differences in online engagement