We’re thinking increasingly about Science Capital and how we apply it to our projects. It is a powerful concept that resonates strongly with what we aim to do and we want to make sure our projects make as much of a positive contribution to young people’s Science Capital as they can. We are looking for ways to evaluate in relation to Science Capital to show whether we are achieving this.

What is Science Capital?

If you’ve read the 2013 ASPIRES report you’ll be familiar with this striking graph showing that although nearly 80% of UK students value science, less than 20% aspire to be scientists. Why is this? 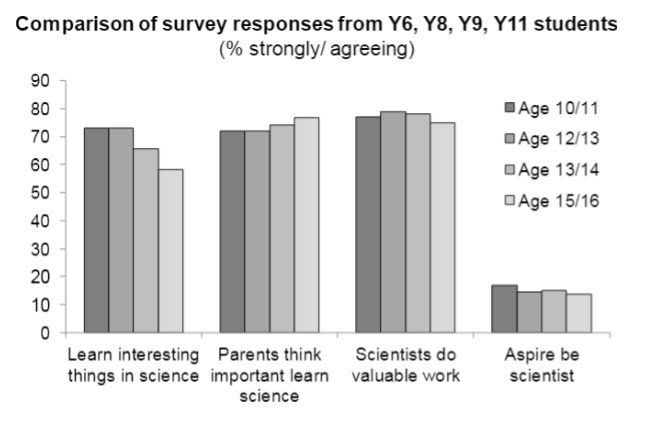 Based on their research, the ASPIRES team have developed the concept of Science Capital; the combination of experiences, personal connections, knowledge and attitudes that contribute to how much a young person identifies as a “science person”. The researchers found that young people with high Science Capital are more likely to have science-related career aspirations than those with lower Science Capital.

The ASPIRES researchers identified eight dimensions of Science Capital. We’ve summarised them below. For more detail follow the link to the Enterprising Science site.

Science Capital and I’m a Scientist

Our data and experience suggest that taking part in our I’m a … events has a measurable impact on students’ attitudes towards science and make a positive contribution to young people’s Science Capital.

We’ve looked at the 12 dimensions of Science Capital listed above and thought about whether and how I’m a Scientist contributes to each. There are three dimensions where we think our contribution is – or should be – most significant: knowing people in science-related jobs, scientific literacy, and knowledge about the transferability of science.

Description: The people a young person knows (in a meaningful way) in their family, friends, peers and community circles who work in science-related roles.

We had a lot of discussion about whether the interactions between young people and scientists during I’m a Scientist, qualify as knowing someone “in a meaningful way”. Ultimately, we felt that while our events don’t fully fit the description, they fit the spirit, and – we think – make a small, though convincing contribution.

In fact, this is the area where we think our projects are most distinctive among STEM interventions. Young people who take part, engage in sustained and enthusiastic interactions with a group of real STEM professionals. Some students even form opposing teams to support their favourite scientist!

Description: A young person’s knowledge and understanding about science and how science works. This also includes their confidence in feeling that they know about science.

Knowledge about the transferability of science

Description: Understanding the utility and broad application of science qualifications, knowledge and skills used in science (e.g. that these can lead to a wide range of jobs beyond, not just in, science fields).

Knowledge about the transferability of science is a really important dimension, and one where we should be able to make a contribution. At the moment, we are concerned we’re not getting it quite right.

We have run the occasional zone with candidates who have a science background but work in other roles, but in general zones tend to comprise only practicing scientists or engineers. We’re concerned this reinforces the “science = scientist” idea rather than helping students see that science skills are transferrable.

We’re working on evaluating whether our concerns are justified, and how we could adjust the composition of future zones to improve things.

We’re just at the start of this process of evaluating projects in relation to Science Capital. As mentioned above, the process has already made us think about how our I’m a… projects contribute to young people’s knowledge about the transferability of science.

We’d really welcome discussion about this to help us develop our thinking so please get in touch and share your thoughts, either in the comments below, or elsewhere.

As a final note, there are also a few Science Capital dimensions where we don’t have much influence, and one – science-related attitudes, values and dispositions – where we think we do contribute, but would find it hard to evidence.