Taking the whole-school approach to I’m a Scientist

When Jon Hale decided to sign his students up for I’m a Scientist, Get me out of here, there were no half-measures. He wanted the entire school to take part… all at once.

“One of the teachers said that it was the best activity they’ve done this year,” Jon, Head of Biology at Beaulieu Convent School in Jersey, says, “The students were really engaged – my colleagues have said they were buzzing!” 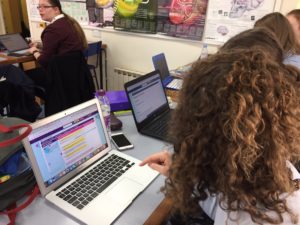 Taking part as one huge group stimulated debate and discussion among the students, even outside of the instant messaging-style Chats. “The students were having their own conversations in the room. My colleagues noticed that they were collaborating and asking questions to each other as well. There was a lot of, ‘Ask them this, ask them that.’

“My colleagues were watching conversations unfold, and seeing individual students’ interests that they hadn’t seen before. It’s a great way to get to know students in a different light.

Students were collaborating and asking questions to each other. There was a lot of, ‘Ask them this, ask them that.'”

Jon believes that taking part helped students feel more engaged with their in-classroom learning too: “It definitely raised the profile of STEM. Lots of students might feel a bit insecure about asking questions to strangers, but the text-only conversation removes any barriers. There’s no judgement on what they say or how they phrase a question. The whole thing is incredibly supportive.”

It sounds like a lot to set up, but as Jon explains: “The I’m a Scientist Team were so helpful and arranged everything; I just had to pass on the email addresses of staff members taking part. It was very efficient.” Even when year 8 was sent home just before lunch and were self-isolating, some students were still able to take part from home.

Would Jon take part again? “Yes, definitely. I’m more than happy to do it again on the same scale. In fact, staff have asked me to make it an annual event.”

If you’d like some assistance with getting an entire year group to take part in I’m a Scientist, contact us on support@imascientist.org.uk.

Posted on July 15, 2021 by modjosie in Case Study, Teachers. Tagged Case Study, teachers. Comments Off on Taking the whole-school approach to I’m a Scientist