I’m a Scientist and STFC

Why STFC funds us

Chris Woolford, STFC Science in Society Office Manager, talks about why STFC continues to fund I’m a Scientist, and in particular what they will gain from their most recently announced funding:

The IAS and IEng programmes reach out to a wide audience, some of whom may be a new audience to science, engage them with cutting edge STFC science & technology and could inspire the next generation of scientists and engineers.

With this continued funding from STFC (via our Public Engagement Large Awards Scheme), I’m a Scientist and I’m and Engineer Get me out of here will create 27 STFC zones with 135 STFC facility users and will engage with 9,000 secondary school pupils across the UK. These pupils will be able to interact with scientists working on world leading facilities such as the Central Laser Facility, which carries out its work using the world’s most powerful, most intense and fastest lasers, the Diamond Light Source where beams of light are used to study solids, liquids and gasses to gain information on their atomic & molecular composition and ISIS, which uses neutron and muon particles to reveal the link between the invisible world of atoms and the world of everyday life.” 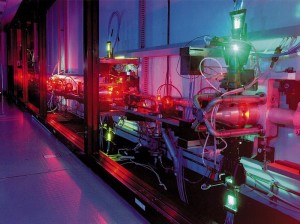 STFC-funded zone scientists have included those working with lasers, image is an AVLIS laser by LeastCommonAncestor for Wikimedia

Since 2011, 35 STFC-funded zone scientists, from accelerator physicists to software scientists, have given nearly 4,000 answers to over 1,500 student questions. The range of questions asked is huge, from could we sleep without eyelids? to what shape are raindrops? Nanobites, gravity and evolution have all been covered, alongside can we cryogenically freeze someone then bring them back to life again? and questions on the Earth’s oxygen supply and whether you can survive with only half a brain.

There’s been talk of inventions, discoveries and challenging stereotypes, alongside lots of zone-specific science questions, including: How fast can lava get when spurting from a volcano? Are crystals living organisms? and What’s the strongest material?

STFC has recently committed to supporting both I’m a Scientist and I’m an Engineer zones until March 2016, enabling even more students to learn about cutting edge topics from top scientists.

We’re looking forward to continuing to work with STFC so students can learn from scientists working at their world-leading facilities. If you think your organisation would benefit from connecting scientists directly with students all over the country too, please get in contact with us: email shane@gallomanor.com or phone 01225 326892.

Call
Send SMS
Add to Skype
You’ll need Skype CreditFree via Skype
Posted on August 9, 2013 by in Case Study. Comments Off on I’m a Scientist and STFC