Do you think science is perfect, or is there something about it you want to change? And can the internet help you do it?

What these, and many more questions have in common is that they partly have to do with communication, and communication is something that the internet is good at. Here at Gallomanor, we’ve been involved in democratic engagement using online tools since 2002.

We think these are simple things which make a difference. Are there things like this that science could do with all the online technologies now available, that we haven’t thought of yet? To put it bluntly, are we missing any tricks?

If so, we want to help! So we’ve decided, with the help of the marvellous Wellcome Trust, to try to do something about it. We’re bringing together a range of people involved in science, science engagement and science policy, along with some hackers and developers from the online civil society scene, to see what they can all spark off in each other.

Event will take place on the afternoon of Wednesday 20th October, at the Wellcome Trust. Put it in your diary! Tickets will be released early next week.

Tell us what you want!

It’s almost two weeks since I’m a Scientist ended. Doesn’t time fly? Do you miss it? We do, but we’re maybe a bit sad like that.

Now we want to know what YOU think about it, what you liked and what you didn’t. If you tell us what you thought, it helps us make it better for next time. Also, you’ll go into a prize draw to win £20 of WH Smiths vouchers.

Thanks for telling us, we really appreciate it.

in Project News | Comments Off on Tell us what you want!

Well the first week is almost over already and it’s been incredibly hectic. This is already the busiest event we’ve ever run – we’ve had nearly 4,000 visitors, just in the last few days!

Thank you to all the students for the interesting, funny and thought-provoking questions. And thanks to all the scientists for all the hard work they’ve put in answering them.

Students – feel free to comment wherever you want to on the site.

Visitors – although you can’t comment, you are very welcome to have a look round and read everything.

If you want to you can follow us on twitter – our twitter feed is http://twitter.com/imascientist, or the hashtag for the event is #IAS2010 – scientists and teachers, if you are on twitter, please use the hashtag if you are tweeting about the event, then people can find all the comments together.

We are having a whale of a time, we hope you are too. Best of luck everyone!

in Evaluation, Project News | Comments Off on Busy, busy, busy!

Welcome to I’m a Scientist, Get me out of Here! This is the only event in the world* where school students choose which scientists gets some money.

For the next two weeks you young people have the power. Use it wisely my friends.

*As far as we know

in Project News | Comments Off on Welcome! 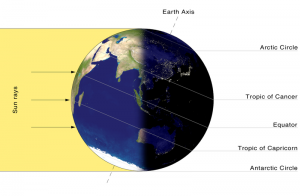 And I hope all my fellow science geeks in the Northern hemisphere had a pleasant Winter Solstice. (Summer solstice wishes, of course, to our Antipodean readers). I am certainly relieved now the sun is coming back… And I hope you all had a great Christmas, Yalda, Saturnalia, Karachun, Hanukkah, Kwanzaa, Yule, or other midwinter festival of your choice.

As you all know, this is going to be a big year for us, now that we have the funding to roll out I’m a Scientist on a much bigger scale. We’ve started the year with a lot of excitement, as we are recruiting a new member of staff to help us cope. I’ve been shortlisting all week (please, teachers, tell your students to never, ever, send someone a file called ‘My CV’. When you get dozens of them the renaming gets very tedious). It’s been really difficult choosing from some very strong candidates but I think everyone on our shortlist would do a great job for us and we are looking forward to interviewing them.

I would like to record here (for Shane-the-boss’s benefit), that I am the event producer who never sleeps! I spent New Year in a big cottage in Scarborough with a group of old friends and, with the help of some New Year’s Eve tequila, have persuaded a public health consultant from Norwich PCT, and a medical physicist from UCLH that they would LOVE to take part in I’m a Scientist.

If you don’t want to be strong-armed into any involvement with youth engagement events, I strongly advise you never to talk to me.

This week I shall be at the ASE conference on Friday and on Saturday. 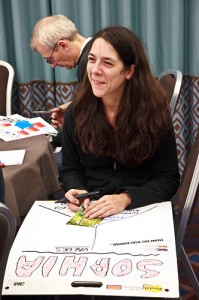 Have you seen this woman?

I look like this picture, only less haggard:-/ If you see me, say hello! I’ll hopefully be talking to lots of people about I’m a Scientist and getting lots more people signed up for the event, or the debate kits, or both!

Next week, back in the office, where one of my priorities will be  coming up with a plan to keep the blog updated more often. I was horrified to notice today how long ago my last post was… Another priority will be keeping warm in the poorly-insulated office of balticness. Happily my Mum bought me thermal undies for Christmas. Bless her.

Our plans for the year are to run two I’m a Scientist events, one smallish scale one in March, to test out the new website (which is being built as we speak!) and then a bigger scale one in June.

If you are a scientist or a teacher who wants to get involved in either (or even both!) then get in touch.

As a cheering little story, here’s a link that made me laugh yesterday. “Locations of Ancient Woolworths Stores follow Precise Geometrical Pattern”. Matt Parker, a mathematician at Queen Mary, University of London has done a great job here of pointing out the flaws in a ridiculous Daily Mail ‘Stone Age satnav’ story by applying the same methodology to a different set of data. Which might be a great way for you to get a class thinking critically about data analysis. Have fun:-)

admin in Project News | Comments Off on Happy New Year and let’s get cracking on 2010!

How to write a killer grant application

I have been wandering around the office looking smug at people today, and was even, at one point, quite tempted to do a little victory dance. Why was that, you say? Ah, I’m glad you asked!